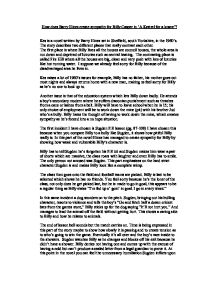 How does Barry Hines create sympathy for Billy Casper in 'A Kestrel for a knave'?

How does Barry Hines create sympathy for Billy Casper in 'A Kestrel for a knave'? Kes is a novel written by Barry Hines set in Sheffield, south Yorkshire, in the 1960's. The story describes two different places that really contrast each other. The first place is where Billy lives all the houses are council houses, the whole area is run down and deprived of luxuries such as central heating. The contrasting place is called Firs Hill where all the houses are big, clean and very posh with lots of luxuries like hot running water. I suppose we already feel sorry for Billy because of the disadvantaged area he lives in. Kes raises a lot of 1960's issues for example, Billy has no father, his mother goes out most nights and always returns home with a new man, making us feel sorry for Billy as he's no one to look up to. Another issue is that of the education system which lets Billy down badly. He attends a boy's secondary modern where he suffers draconian punishment such as thrashes from a cane or lashes from a belt. Billy will have to leave school when he is 15; his only choice of employment will be to work down the mine (pit) ...read more.

Both make you dislike him. The final scene opens with a shot of Sugden stopping Billy for not having a shower, while Billy gets undressed Sugden starts laughing with the other boys, creating pity for Billy as everyone seems to pick on him. The shot cuts to a close up of Sugden turning the shower temperature dial form hot to cold, as in the book. This is an important scene because it shows just how far Sugden will go with his self ego and the fact that no-one bothers sticks up for Billy shows how lonely he is. The shots of Billy in the showers alone are mid shots and close ups. The close-ups show details like goose pimples and actually start to make you feel cold. The shot of him by himself make him look isolated and lonely again creating pity. This part of the story comes across a lot better in the film than in the book . The second incident I have chosen is Billy's talk on kes. This comes before the P.E scene in the book but after in the film. I have chosen this incident as it's about the only time when you hear Billy talking for a long period. It shows the encouragement and attention Billy gets from Mr Farthing and other pupils who actually take interest in Billy and what he has to say. ...read more.

The camera focuses on the employment officer showing the reaction of disgust on his face. "What's the matter with you lad? Sit down, I haven't finished yet" and expressed the feeling of Billy shutting himself off as the employment officers words went over his head. I think both book and film portrayed its characters well and created lots of sympathy for Billy in different ways, the detailed descriptions help you to build images and absorb its contents more so than watching a film scene for a few seconds and missing important details. For example reading the part about Furs Hill allows you to compare Billy's poor living conditions and things seem worse than the film portrayed. The film was easy to understand and changed some of the images already built when reading the book. I found that the added scene of Sugden doing a warm-up very funny, it enhanced his character by showing just how full of himself him he really was. The camera work in the film revealed the facial expressions of the characters and brought out the emotions felt whilst reading the book perfectly. For instance when kes dies you can see the sadness on Billy's face this makes you feel engulfed with sorrow and extremely sympathetic towards him creating a real lump in the throat moment. The novel has been adapted wonderfully using different techniques in different ways allowing both book lover and film buff to converse. ...read more.