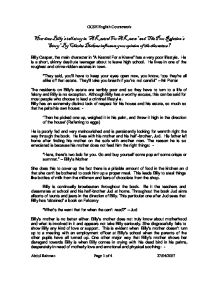 How does Billy's tall story in &quot;A Kestrel For A Knave&quot; and &quot;The Poor Relation's Story&quot; By Charles Dickens influence your opinion of the characters?

How does Billy's tall story in "A Kestrel For A Knave" and "The Poor Relation's Story" By Charles Dickens influence your opinion of the characters? Billy Casper, the main character in "A Kestrel For a Knave" has a very poor lifestyle. He is a short, skinny destitute teenager about to leave high school. He lives in one of the roughest and crime-ridden estates in town. "They said, you'll have to keep your eyes open now, you know, 'cos they're all alike off that estate. They'll take you breath if you're not careful" - Mr Porter The residents on Billy's estate are terribly poor and so they have to turn to a life of felony and Billy is no exception. Although Billy has a worthy excuse, this can be said for most people who choose to lead a criminal lifestyle. Billy has an extremely distinct lack of respect for his house and his estate, so much so that he pelts his own house: - 'Then he picked one up, weighed it in his palm, and threw it high in the direction of the house' (Referring to eggs) He is poorly fed and very malnourished and is persistently looking for warmth right the way through the book. He lives with his mother and his half-brother, Jud. His father left home after finding his mother on the sofa with another man. The reason he is so emaciated is because his mother does not feed him the right things: - "Here, there's two bob for you. ...read more.

Mr Farthing, Billy's English teacher raises Billy's self-esteem and continually praises Billy after hearing his talk on Kes in one of his English lessons. Mr Farthing is genuinely fascinated by Billy's secret and prudent lifestyle with Kes. "Right, you can sit down now. That was very good, I enjoyed it, and I'm sure the class did" - Mr Farthing So much so that he asks to see Kes with Billy. After seeing Billy and Kes in action he labels Billy as a natural with animals. Billy sees Mr Farthing as a friend and is not afraid to open up to him, and he does after the fight with McDowell in the yard as he provides Billy with a shoulder to cry on. This is very unique as Mr Farthing is the only adult that Billy feels this way about. I can't really say that Kes gives Billy the power to revolutionize and turn around his social life, because she doesn't. But Kes is extremely close to Billy's heart. Kes gives Billy a sense of satisfaction and achievement. People can look upon Kes and can see the way Kes and see the way she's been, and with extreme adroit, trained by Billy. Kes gives Billy the will to live another day while others in Billy's position would have given up on life long ago. Kes is effectively Billy's best friend and whom he spends most of his spare time with and would have continued to do so after he left school if events wouldn't have gone the way they have done. ...read more.

So why has Billy included this in his Tall Story? Bill quite clearly doesn't get even the basic meals and this causes him to long for these things. Overall, Billy's Tall Story is very basic. It includes all the things that other kids take for granted. He longs for his father to return, while kids who have a father to look up to don't even think about. He asks for bare necessities such as a carpet in his house to walk on, which again, most people wrongly take for granted, and quite plainly, if Billy had these basic provisions it would boost is confidence to the highest degree. He is, without a doubt, gravely displeased with his present lodgings. He longs to live in a bigger house to live in. He sees a house in an area called Moors Edge, where he does his daily newspaper round. He couldn't make the fact that he doesn't want his half-brother Jud around any clearer. He just wants all the things that normal kids his age have, nothing more. He wants a loving family who think the world of him and show it. He wants his teachers to treat him right and not to lash out at him all the time. He wants a pleasant home to live. He wants proper food on the table and wants to be able to give up stealing which he did to solely survive. Reading about Billy's daily lifestyle and how it differs from the majority of the population almost brings a tear to they eye. GCSE English Coursework Abdul Rahman Page 1 of 4 27/04/2007 ...read more.