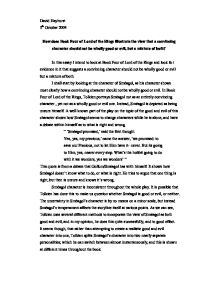 How does Book Four of Lord of the Rings illustrate the view that a convincing character should not be wholly good or evil, but a mixture of both?

Tolkien describes physical change in the character as he changes states of mind, as we can see from this. "Sm�agol was holding a debate with some other thought that used the same voice, but made it squeak and hiss. A pale light and a green light alternated in his eyes as he spoke" This quote is a good example of how Tolkien describes Sm�agol's physical changes that occur while he changes character. The only time that these physical changes influence the play, is when Sam is awakened by Sm�agol talking to himself, and he notices these physical changes occurring. These, with what Sm�agol is saying combine to grow great suspicion over Sm�agol's character in Sam's mind. There is evidence in the story that Gollum is evil, yet this contradicts evidence that he is good, although it is possible that his good is purely motivated by self gain. This quote shows evidence of Gollum's evil. " 'Got him!' hissed Gollum in his ear. 'At last, my precious, we've got him, yes, the nasty hobbit. We takes this one. She'll get the other. O yes, Shelob will get him, not Sm�agol: he promised; he won't hurt master at all. ...read more.

He states that although Gollum deserves death, he isn't dead, and that some who do die, deserve to live. So what may appear as Frodo being harsh; considering killing Sm�agol, he is simply being practical and realistic, not retaliating to anger or hatred with violence. Despite all this, Frodo's efforts to be good do appear unrealistic, as his calmness through considering something as terminal as death seams almost insane and not at all human like. His lack of emotion is like that of an autistic human; and I have no reason to believe that Frodo is playing the role of an autistic character. I have looked at how the character of Frodo plays a fairly good role, who can stay calm through what seems to be any situation, and how the character of Sm�agol alternates between good and evil, yet never being consistent with one or the other. From looking at my evidence, I think that a convincing character cannot be wholly good or wholly evil, if they are based on humans. In this story, Hobbits share many characteristics of a human in their communication and thought, and the over-composed character of Frodo, and the unsettled state of the character of Sm�agol I find it unconvincing. ...read more.