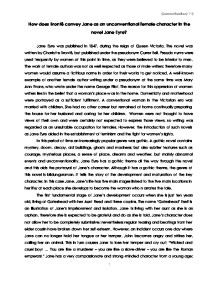 How does Bront convey Jane as an unconventional female character in the novel Jane Eyre?

How does Bront� convey Jane as an unconventional female character in the novel Jane Eyre? Jane Eyre was published in 1847, during the reign of Queen Victoria. The novel was written by Charlotte Bront�, but published under the pseudonym Currer Bell. Pseudonyms were used frequently by women at this point in time, as they were believed to be inferior to men. The work of female authors was not as well respected as those of male writers; therefore many women would assume a fictitious name in order for their works to get noticed. A well-known example of another female author writing under a pseudonym at the same time was Mary Ann Evans, who wrote under the name George Eliot. The reason for this oppression of women writers lies in the belief that a woman's place was in the home. Domesticity and motherhood were portrayed as a sufficient fulfilment. A conventional woman in the Victorian era was married with children. She had no other career but remained at home continually preparing the house for her husband and caring for her children. Women were not thought to have views of their own and were certainly not expected to express those views, so writing was regarded as an unsuitable occupation for females. However, the introduction of such novels as Jane Eyre aided in the establishment of feminism and the fight for women's rights. In this period of time an increasingly popular genre was gothic. A gothic novel contains mystery, doom, decay, old buildings, ghosts and madness; but also subtler features such as courage, mysterious places, a sense of place, dreams and weather, but mainly abnormal events and unconventionality. Jane Eyre has a gothic theme all the way through the novel and this aids the portrayal of Jane's character. Although it has a gothic theme, the genre of this novel is bildungsroman. It tells the story of the development and maturation of the key character, in this case Jane. ...read more.

Therefore, when Miss Temple gets married and leaves Lowood, Jane states that: "her friendship and society had been my continual solace; she had stood me in the stead of mother, governess, and latterly companion. At this period she was married, removed with her husband to a distant country, and consequently was lost to me". Jane believed that she could not have stayed at Lowood, which at first she believed to be an awful place, without Miss Temple and when Miss Temple leaves, Jane believes that now Miss Temple has gone she can no longer stay there. "From the day she left I was no longer the same: with her was gone every settled feeling, every association that had made Lowood in some degree a home to me." When Miss Temple leaves Jane realises that she also needs to move on; in some ways she is copying Miss Temple although she does not intend to get married, just to become independent and begin a new phase in her life. Miss Temple reflects what a conventional woman would do at this time; move on by getting married, while Jane decides to almost do the opposite, to move on, on her own. "My world had for some years been in Lowood: my experience had been of its rules and systems; now I remembered that the real world was wide, and that a varied field of hopes and fears, of sensations and excitements, awaited those who had courage to go forth into its expanse, to seek real knowledge of life amidst its perils." Jane wants to experience new things and gain new knowledge so she applies for a governess job at Thornfield. When Jane reaches Thornfield she is a young woman, wanting to become a governess. She has already worked as a teacher for two years and is not intending on finding a husband and settling down; she is determined to have a career. ...read more.

Consequentially, Jane now has money to be an equal to a husband and coincidentally one night she hears Mr Rochester calling out to her. This is a very important scene with gothic elements included in it: Jane is having some sort of psychic message from Thornfield. When she runs outside it is very dark with a low sighing wind which gives the scene an eerie setting. When Jane returns to Thornfield she hears that it had been burnt down which links in with what she heard. The final stage of Jane's development is when she meets Rochester at Ferndean and learns that he has been disabled by the incident at Thornfield. She now feels she is an equal to him as she has enough money to not be reliant on him and she can be a nurse to him, she will be content with looking after him. In this novel I believe Charlotte Bront� portrays Jane as a feminist; she does not believe in the traditional status of women and she endeavours to be equal to Mr Rochester. I feel that Bront� used the gothic elements such as the weather and specific themes throughout the novel enhance Jane's unconventionality as they reflect the themes appearing in gothic novels. I also noticed how the language used developed with Jane throughout her life; at the beginning when she was a small child the narrative included advanced vocabulary as the narrator was Jane as an older woman, however Jane's speech was very simple and childish. As Jane grew up her speech became more sophisticated and religious as well, as she was taught at a religious school; I believe Bront� used Jane's language development to aid her development into a woman with views that she could portray well. I think Jane Eyre was written with the intention to change the way women were portrayed in the Victorian times. Jane was a model of a modern women becoming equal to her husband and being independent. ?? ?? ?? ?? Gemma Bradbury 11S 1 ...read more.