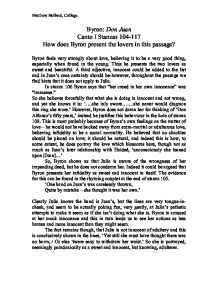 How does Byron present the lovers in this passage?

Byron: Don Juan Canto I Stanzas 104-117 How does Byron present the lovers in this passage? Byron feels very strongly about love, believing it to be a very good thing, especially when found in the young. Thus he presents the two lovers as sweet and beautiful. A third adjective, innocent could be added to the list and in Juan's case certainly should be-however, throughout the passage we find hints that it does not apply to Julia. In stanza 106 Byron says that "her creed in her own innocence" was "immense." So she believes forcefully that what she is doing is innocent and not wrong, and yet she knows it is: '....she inly swore.......she never would disgrace this ring she wore.' However, Byron does not damn her for thinking of 'Don Alfonso's fifty years,' instead he justifies this behaviour in the hole of stanza 108. This is most probably because of Byron's own feelings on the matter of love - he would not have backed away from extra-marital or adulterous love, believing infidelity to be a social normality. ...read more.

Byron is amused at her mock innocence and this in turn leads us to see her actions as less brazen and more innocent than they might seem. The fact remains though, that Julia is not innocent of adultery and this is conclusively shown in the lines, 'Yet still she must have thought there was no harm, / Or else 'twere easy to withdraw her waist.' So she is portrayed, seemingly paradoxically as a sweet and innocent, but knowing, adulterer. Don Juan, on the other hand, being only a young boy of sixteen is portrayed as completely na�ve and innocent. 'His young lip thanked it with a grateful kiss And then abashed at its own joy, withdrew In deep despair, lest he had done amiss.' The reader knows that he is completely na�ve, having previously read of his 'breeding, which was strictly moral.' So it comes as no surprise then that in this, his first romantic encounter, he should be ignorant of what to do and that Byron should portray him as he does. ...read more.

'A little still she strove and much repented,' at the end of the passage shows she is still a woman of integrity, rather than one of loose morals. This is how Byron portrays the individual lovers. Together, they are depicted as a beautiful couple - 'how beautiful she looked,' - full of the initial exuberance of first love. Byron emphasizes the purity and goodness of their love over its illegitimacy in the eyes of the world and society, justifying it as much by describing its beauty as by showing why Julia's marriage with Alfonso is not pure and good in stanza 108. In this respect Byron's portrayal of the lovers in this passage is a continuation of the general theme of the hypocrisy of society in 'Don Juan'. Ironically, Byron shows us, Julia's legitimate marriage is un-natural and not really that good, whereas her illegal relationship with Juan is described with beautiful poetry, and is clearly more natural and proper than that of the former. Matthew Holland, College ...read more.