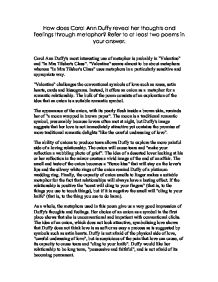 How does Carol Ann Duffy reveal her thoughts and feelings through metaphor? Refer to at least two poems in your answer.

How does Carol Ann Duffy reveal her thoughts and feelings through metaphor? Refer to at least two poems in your answer. Carol Ann Duffy's most interesting use of metaphor is probably in "Valentine" and "In Mrs Tilsher's Class". "Valentine" seems almost to be about metaphors whereas "In Mrs Tilsher's Class" uses metaphors in a particularly sensitive and appropriate way. "Valentine" challenges the conventional symbols of love such as roses, satin hearts, cards and kissograms. Instead, it offers an onion as a metaphor for a romantic relationship. The bulk of the poem consists of an exploration of the idea that an onion is a suitable romantic symbol. The appearance of the onion, with its pearly flesh inside a brown skin, reminds her of "a moon wrapped in brown paper". The moon is a traditional romantic symbol, presumably because lovers often met at night, but Duffy's image suggests that her love is not immediately attractive yet contains the promise of more traditional romantic delights "like the careful undressing of love". ...read more.

As a whole, the metaphors used in this poem give us a very good impression of Duffy's thoughts and feelings. Her choice of an onion as a symbol in the first place shows that she is unconventional and impatient with conventional clichs. The idea of an onion, which does not look attractive, symbolising love shows that Duffy does not think love is as soft or as easy a process as is suggested by symbols such as satin hearts. Duffy is not afraid of the physical side of love, "careful undressing of love", but is suspicious of the pain that love can cause, of its capacity to cause tears and "cling to your knife". Duffy would like her relationship to be long term, "possessive and faithful", and is not afraid of its becoming permanent. Although "In Mrs Tilsher's Class" is less concerned with imagery, Carol Ann Duffy's choice of images seems particularly appropriate and effective. ...read more.

Signs of change and growing up are demonstrated by the tadpoles that change from commas to exclamation marks. Commas indicate short pauses and do not denote an end to anything, but exclamations are emphatic stops. This premonition of change is followed by the rough boy telling the 'you' of the poem about sex, marking a transition to less comfortable imagery. July is "feverish" and there is a "tangible" sense of alarm. These feelings are out of key with the innocent wonder of the early part of the poem and there is a corresponding decline in the child's relationship with the teacher. By the end of the poem, the pent up feelings of the child are expressed in the thunderstorm which "split" open the sky. Carol Ann Duffy makes few explicit statements about the thoughts and feelings of the child in the poem but by careful attention to the meaning of the metaphors she has chosen it is possible to get a very clear idea of the child's thought processes. ...read more.