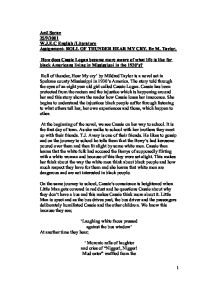 How does Cassie Logan become more aware of what life is like for black Americans living in Mississippi in the 1930&amp;#146;s?

Anil Soray 25/9/2001 W.J.E.C English /Literature Assignment- ROLL OF THUNDER HEAR MY CRY, By M. Taylor. How does Cassie Logan become more aware of what life is like for black Americans living in Mississippi in the 1930's? Roll of thunder, Hear My cry' by Mildred Taylor is a novel set in Spokane county Mississippi in 1930's America. The story told through the eyes of an eight year old girl called Cassie Logan. Cassie has been protected from the racism and the injustice which is happening around her and this story shows the reader how Cassie loses her innocence. She begins to understand the injustices black people suffer through listening to what others tell her, her own experiences and those, which happen to other. At the beginning of the novel, we see Cassie on her way to school. It is the first day of term. As she walks to school with her brothers they meet up with their friends. T.J. Avery is one of their friends. He likes to gossip and on the journey to school he tells them that the Berry's had kerosene poured over them and then lit alight by some white men. Cassie then learns that the white folk had accused the Berrys of supposedly flirting with a white woman and because of this they were set alight. This makes her think about the way the white men think about black people and how much respect they have for them and she learns that white men are dangerous and are not interested in black people. On the same journey to school, Cassie's conscience is heightened when Little Man gets covered in red dust and he questions Cassie about why they don't have a bus and this makes Cassie think more about it. ...read more.

and they will get away with it When Cassie goes to Strawberry with her mum she learns that the best parts of the field market at the front go to white people and black people have to take their wagons to the back of the field to set their stalls up. When Cassie asks Big Ma why wagons are parked at the front and theirs is at the back Bi Ma replies '"Them white folks wagons Cassie'" Cassie learns that white folks get to park their wagons in the best parts of the market but she doesn't understand why this is so. When Stacey, Cassie and T.J go into the Barnett store Cassie gets into a mess when T.J, Cassie and Stacey are waiting to be served. A white woman comes up and tells Mr Barnett to serve her, and while Mr Barnett is serving T.J he stops and goes to serve the woman. Then when Cassie goes to see what is taking so long she spots Mr Barnett serving a "WHITE" little girl. Cassie is shocked but doesn't know why he did that. Then she says to Mr Barnett '"You was helping us'" While pulling on his shirt, he recoiled as if Cassie had struck him. She then says; '"You was waiting on us before you was waiting on this little girl here, and we've been waiting a good while for you to get back'" Then Mr Barnett replies back to her by saying '"Well you just get your little black self over there and wait some more'" Cassie complains about this and can't believe what he said and carry's on complaining so Mr Barnett shouts; '"Whose little ...read more.

She thinks all the people are black but R.W and Melvin are wearing black stockings so, Mrs Barnett says '"You niggers done kill Jim Lee Barnett'' The Simm's brothers wore these deliberately so they would not get blamed. T.J then threatened to tell on the Simms brothers but they beat T.J up so badly so he wouldn't be able to tell. We are told; '"They beat him up with savage blows until he could not stand'" T.J did not know he was robbing the shop and so he thought it was okay because R.W and Melvin said they'd pay for the gun the next day. Cassie later witnesses that R.W and Melvin break into the Avery house with a lot of other men and threw them out their house T.J was battered because of the robbery and the pistol that was robbed was found in his pocket. Cassie cried when she found out T.J could be hung for murder, she cries because of the land, she says '"I have never liked T.J but he had always been there, a part of me, a part of my life and I thought he always would be. I knew this would not pass'" '"I cried for T.J, T.J and the land'" She cries for him because a part of her has gone forever. She understands the injustice of black people and that "guilty till proven innocent" does not apply to black people. She has learnt a lot from her experiences and realises that life is unjust and black people are discriminated against. Cassie's learning experiences would carry on for the rest of her life, learning how cruel life can be to black people and how you have to live with it. 1 ...read more.