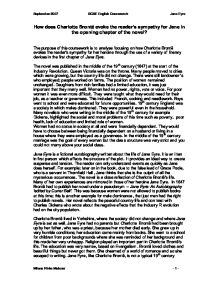 How does Charlotte Bront evoke the reader's sympathy for Jane in the opening chapter of the novel?

How does Charlotte Bront� evoke the reader's sympathy for Jane in the opening chapter of the novel? The purpose of this coursework is to analyse focusing on how Charlotte Bront� evokes the reader's sympathy for her heroine through the use of a variety of literary devices in the first chapter of Jane Eyre. The novel was published in the middle of the 19th century (1847) at the start of the Industry Revolution. Queen Victoria was on the throne. Many people moved to cities which were growing, but the country life did not change. There were still landowner's who employed; people worked on farms. The position of women remained unchanged. Daughters from rich families had a limited education, it was just important that they marry well. Women had no power, rights, vote or voice. For poor women it was even more difficult. They were taught what they would need for their job, as a teacher or governess. This included French, cooking and needlework. Boys went to school and were educated for future opportunities. 19th century England was a society in which males dominated. They were powerful even in the household. Many novelists who were writing in the middle of the 19th century for example Dickens, highlighted the social and moral problems of this time such as poverty, poor health, lack of education and limited role of women. ...read more.

Right from the beginning we can see how Jane stands up for herself; she stands up by using a challenging question: "What does Bessie say I have done?" The Reeds speak to Jane without any respect, the only dialogue between her relatives and her is harsh like "Be seated" and "remain silent". Jane tries to be unnoticed "I slipped in there". Her only escape is the world of fantasy, books and pictures help her. Jane dreams of being protected, but this does not happen in reality. There is again a use of pathetic fallacy - "mist and cloud", "rain" and "wildly", that reflects Jane's feelings. We are aware that she is a child so young and feels so badly, she is a victim. Jane reads a book about birds "Bewick's History of British Birds". This book symbolises her desire to escape from this world. Although Jane wants to escape from reality the book does not take her away because the context set in the book ("bleak, "forlorn and "winters") brings her back to her situation. A little girl of ten should not be reading such a depressing book. "Solitary churchyard" refers to darkness and discomfort what emphasises her sense of loneliness and depression. ...read more.

The use of language and contextual features help to support one of Bront�'s aims in writing this novel, to highlight the hardship women had to suffer in Victorian times. I think Charlotte Bront� has been very successful in evoking sympathy for Jane Eyre in the opening chapter of the novel. I did feel strong sympathy for Jane the very first time when she is dismissed from sitting in the living room with the other children. I especially feel sympathy for Jane because she has the problem that people around her can not appreciate her intelligence and depth. The fact that she is an intelligent child with serious questions brings her into trouble with other people that can not stand that she is not a blind follower. I think it is a kind of vicious circle that when Jane is treated badly by other people (especially by John Reed) she rebels against them and makes them angry which leads her into more trouble. I am touched as I think she is quite rebellious because she is treated with injustice. Jane's emotional intensity and openness cause the reader to identify with her, so that her experiences and feeling temporarily become those of most readers. ?? ?? ?? ?? September 2007 GCSE English Coursework Jane Eyre Milena Rivka Meixner - 1 - ...read more.