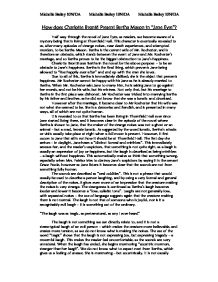 How does Charlotte Bront Present Bertha Mason in &quot;Jane Eyre&quot;?

How does Charlotte Bront� Present Bertha Mason in "Jane Eyre"? Half way through the novel of Jane Eyre, as readers, we become aware of a mystery being that is living at Thornfield Hall. This character is eventually revealed to us, after many episodes of strange noises, near death experiences, and attempted murders, to be Bertha Mason. Bertha is the current wife of Mr. Rochester, and is therefore an obstacle, which stands between the event of Jane and Mr. Rochester's marriage, and so Bertha proves to be the biggest obstruction to Jane's happiness. Charlotte Bront� uses Bertha in the novel for the above purpose - to be an obstacle to Jane's happiness. Bertha is the final thing, which prevents Jane being allowed to "live happily ever after" and end up with the man she loves. Due to all of this, Bertha is immediately disliked; she is the object that prevents happiness. Mr Rochester cannot be happy with his Jane as he is already married to Bertha. When Mr. Rochester asks Jane to marry him, he is asking Jane to go against her morals, and not be his wife, but his mistress. Not only that, but his marriage to Bertha in the first place was dishonest. Mr Rochester was tricked into marrying Bertha by his father and brother, as he did not know that she was a lunatic and drunkard. However after the marriage, it became clear to Mr Rochester that his wife was not what she seemed to be. She is a demoniac and fiendish, and is presented in many ways, all of which are not quite human. It is revealed to us that Bertha has been living in Thornfield Hall ever since Jane started living there, and it becomes clear in the episode of the novel where Bertha is shown to Jane, that the maker of the strange noises was not a ghost or an animal - but a mad, female lunatic. ...read more.

She has the unpredictability of a wild animal, and is just as vicious. From the above quote, the reader can tell that, not only is Bertha like a wild beast, but she is a snarling, angry beast, willing and ready to attack anyone she wants to - no matter who they are. In the aftermath of the attack, Jane can hear Bertha stirring in the room next to her. She is in darkness - meaning that sounds can be heard, but nothing can be seen. Bertha is again described as a "wild beast" by the sound she makes, and a "fiend". She is described as the devil, which very much emphasizes the fact that she is evil. No words have been used to make us see anything good about Bertha - we are supposed to hate her. When Mr Mason is talking to Mr Rochester, Bertha is presented as a wild animal. "She worried me like a tigress" This quote describes the attack of Mr Mason to be the attack of a wild animal on its prey. Bertha's method of attack was not one that would be used by a human to kill someone, but an attack that only a wild animal would use - worrying. Throughout the whole of the novel, Bertha Mason does not have a human voice. She is only heard making the noise of an anima, and she never directly speaks to anyone. However, the first and only time she speaks, is during the attack on her brother "She said she'd drain my blood" This quote presents Bertha to be like a vampire. She threatens to drain her brother's blood, as a vampire would do. This is a representation of Bertha to be like another frightening and deadly creature that comes out in the dead of night, and is used to build up more horror at the though of what Bertha could be. ...read more.

How Bertha is an evil monster, and how Jane is very pure, and very calm even when faced with great danger. Charlotte Bront� uses this to show how Bertha and Jane are very much opposites of each other. Near the end of the novel, Bertha shows how truly evil she is - how she is evil to the very end. Jane discovers that Bertha set fire to Thornfield Hall - hoping to kill everyone inside the Hall, as well as destroying the place where she is trapped. Bertha eventually commits suicide - however she is evil, beastly, and spiteful to the very end. The way she is described leaves us feeling disgust, and hatred towards Bertha - not pity. "She was standing, waving her arms, above the battlements, and shouting out till they could hear her a mile off.... she was a big woman, and had long black hair: we could see it streaming against the flames as she stood... she yelled and gave a spring and the next minute she lay smashed on the pavement...dead as the stones on which her brain and blood were scattered" From the description, Bertha is presented as the devil - standing amidst the flames, with her black hair streaming against them. This all helps us build more hatred for Bertha - she tried to kill everyone in Thornfield Hall, and shows no remorse - she is shouting and yelling for everyone to hear. When she jumps off the building, her death is described in a way that makes the reader feel sickened, and we do not feel sorry for Bertha for committing suicide - the reader feels relief that she is dead. In conclusion, Bertha is presented as an evil beast throughout the whole of the novel. Right up to Bertha's death she is described as being evil, and just before she dies, she has committed a great act of spite. Michelle Bailey 10N/DA Michelle Bailey 10N/DA Michelle Bailey 10N/DA ...read more.