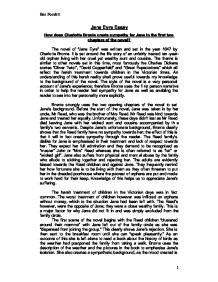 How does Charlotte Bronte create sympathy for Jane in the first two chapters of the novel?

Jane Eyre Essay How does Charlotte Bronte create sympathy for Jane in the first two chapters of the novel? The novel of "Jane Eyre" was written and set in the year 1847 by Charlotte Bronte. It is set around the life story of an unfairly treated ten-year-old orphan living with her cruel yet wealthy aunt and cousins. The theme is similar to other novels set in this time, most famously the Charles Dickens stories "Oliver Twist", "David Copperfield" and "Great Expectations" which all reflect the harsh treatment towards children in the Victorian times. An understanding of this harsh reality shall prove useful towards my knowledge to the background of the novel. The style of the novel is a very personal account of Jane's experience; therefore Bronte uses the first person narrative in order to help the reader feel sympathy for Jane as well as enabling the reader to see into her personality more explicitly. Bronte strongly uses the two opening chapters of the novel to set Jane's background. Before the start of the novel, Jane was taken in by her uncle, Mr Reed, who was the brother of Mrs Reed. Mr Reed was kind towards Jane and treated her equally. Unfortunately, these days didn't last as Mr Reed died leaving Jane with her wicked aunt and cousins accompanied by the family's two servants. Despite Jane's unfortunate background, Bronte clearly shows that the Reed family have no sympathy towards her; the effect of this is that it will in fact create sympathy through the reader. The Reed family's dislike for Jane is emphasised in their treatment and lack of respect towards her. ...read more.

This even frustrates John enough for him to attack Jane again as "He ran headlong" towards Jane and grasped her hair and shoulder. The fist person narrative is used to emphasise Jane's fear as she explains, "I really saw in him a tyrant: a murderer". Seeing Jane this scared immediately makes us feel sympathy for her. Jane then loses control and is taken over by her natural reactions. We are told "I don't very well know what I did with my hands, but he called me 'Rat! Rat!' and bellowed out aloud". We can only assume Jane uncontrollably struck John without intention. Then Mrs Reed enters the scene followed by Bessie and Abbot. Jane then hears the words "Dear! Dear! What a fury to fly at Master John!". This shocks the reader as it is so blatant that Jane is the victim and as we took her side earlier we feel we are on the losing side. Mrs Reed then commands her servants to take Jane away to the dreaded 'red room' and to "lock her in there". Jane is ultimately being punished for being punished which is why we feel sympathetic for her. This chapter as a whole is a 'crescendo of tension'. It starts off with Jane being rejected leaving her isolated. She then suffers physical and mental abuse from John, which ends up in a fight, and finally she is blamed for the fight and taken to the red room making a cliffhanger ending. The effect of the cliffhanger ending makes the reader want to read on. Chapter two opens with Jane although trying to resist it was being dragged through the house towards the 'red room' by the family's two servants Bessie and Abbot. ...read more.

We can understand the discipline of children in those days was harsher than it is today but the reader can explicitly tell that Mrs Reed's method of discipline is cold, cruel and harsh even in those days, especially when considering what the punishment was for. The chapter ends as "unconsciousness closed the scene". We can gather from these words that Jane's fear was too great for her to handle and her body has therefore 'turned off' as a defence mechanism. This again creates a 'cliff-hanger' ending and makes the reader want to read on to find out what has happened to Jane. Just as she did in chapter one; Bronte creates a 'crescendo of tension' and does in fact follow a similar build up pattern. It begins with Jane isolated in the red room where she suffers from mental stress and mental torture. This leads to her fighting against her hallucinations, which results in her becoming so scared, she passes out and creates a cliffhanger ending. In conclusion to the opening of the novel; Bronte opens by creating a shock towards the reader who is immediately stunned by how Jane is treated as we are constantly informed of events where she suffers from verbal insults and physical and mental abuse. The first person narrative means we see everything from Jane's point of view and the detailed description within this helps us to identify with her difficulties plus the fact the 'crescendo of tension' is used, makes the book gripping for the reader. But above all Bronte's use of language and the way she uses the techniques of foreshadowing and dialogue really do work well in completing her target of creating sympathy for Jane. The End ?? ?? ?? ?? Ben Pomlett 1 ...read more.