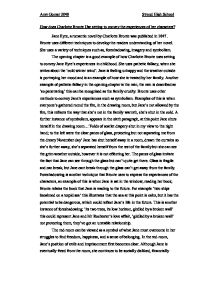 How does Charlotte Bronte Use setting to convey the experiences of her characters?

How does Charlotte Bronte Use setting to convey the experiences of her characters? Jane Eyre, a romantic novel by Charlotte Bronte was published in 1847. Bronte uses different techniques to develop the readers understanding of her novel. She uses a variety of techniques such as, foreshadowing, imagery and symbolism. The opening chapter is a good example of how Charlotte Bronte uses setting to convey Jane Eyre's experiences in childhood. She uses pathetic fallacy, when she writes about the 'cold winter wind'. Jane is feeling unhappy and the weather outside is portraying her mood and is an example of how she is treated by her family. Another example of pathetic fallacy in the opening chapter is the rain; the rain is described as 'so penetrating' this can be recognised as the family cruelty. Bronte uses other methods to convey Jane's experiences such as symbolism. Examples of this is when everyone's gathered round the fire, in the drawing room, but Jane's not allowed by the fire, this reflects the way that she's not in the family warmth, she's shut in the cold. A further instance of symbolism, appears in the sixth paragraph, at this point Jane shuts herself in the drawing room...'Folds of scarlet drapery shut in my view to the right hand; to the left ...read more.

There is a great use of juxtaposition, which shows Jane's low status in the household. 'The bed rose before me; to my right hand there was the high, dark wardrobe...' this reference demonstrates contrast, Bronte is writing about large objects which makes Jane look and feel small, this also reflects her status. There is a ghostly death feel to the Red Room, 'it was here where he breathed his last' this relates to Mr Reed's death, 'pillows of the bed, spread with a snowy Marseilles counterpane' this extract could indicate a ghostly feel to the room, because of the sheet and the snowy disposition. Throughout the novel Charlotte Bronte uses another way to portray the experiences of her characters through symbolism. This symbolism is used a lot with the fire. The fire reflects relationships, feeling and also foreshadows the future in some cases. An example of this is in Miss temple's room in chapter five, 'the servant led me through a passage into a room with a fire where she left me alone. I stood and warmed my numbed fingers over the blaze' Firstly the servant is bringing Jane into the family warmth and is providing her with love and friendship. ...read more.

The setting in this scene isn't like the setting in the proposal of Rochester this could indicate that Rochester's proposal was more romantic and unique. Bronte comments on the aspect of her nature that always complies with characters stronger than her own up to the moment of 'determined revolt'. There are echoes of the confrontations with Mrs Reed and Rochester in her interview with St John. In spite of everything, Jane remains firm in her ideas about love. Her passionate side values beauty of true love is clearly displayed in her rejection of St John's offer. She rejects the idea of being 'forced to keep the fire of my nature continually low, to complex it to burn inwardly and never utter a cry, though the imprisoned flame consumed vital after vital' (chapter 34) this is a dramatic and moving description of the horror she feels at living in a loveless marriage. In conclusion Charlotte Bronte develops the experiences because it makes her writing, good writing. Her techniques that she uses, creates her novel to be a classical, she makes her novel as successful as it can be. Bronte involves the reader into her writing and brings the book into universal context. Amy Gomer 3048 Stroud High School ...read more.