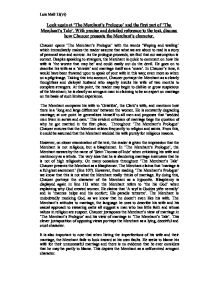 Chaucer opens ‘The Merchant’s Prologue’ with the words ‘Weping and wailing’ which immediately makes the reader assume that what we are about to read is a story of personal woe and sorrow. As the prologue proceeds, we find that our assumption is correct. Despite speaking to strangers, the Merchant is quick to comment on how his wife is ‘the worste that may be’ and could easily out do the devil. He goes on to describe his wife as a ‘shrewe’ and marriage itself as a ‘snare’. In Chaucer’s time, it would have been frowned upon to speak of your wife in this way; even more so when on a pilgrimage. Taking this into account, Chaucer portrays the Merchant as a clearly thoughtless and disloyal husband who eagerly insults his wife of two months to complete strangers. At this point, the reader may begin to dislike or grow suspicious of the Merchant; he is clearly an arrogant man in claiming to be an expert on marriage on the basis of such limited experience.

The Merchant compares his wife to ‘Grisildis’, the Clerk’s wife, and mentions how there is a ‘long and large difference’ between the women. He is constantly degrading marriage; at one point he generalises himself to all men and proposes that ‘wedded men liven in sorwe and care.’ This evident criticism of marriage begs the question of why he got married in the first place.  Throughout ‘The Merchant’s Prologue’ Chaucer ensures that the Merchant relates frequently to religion and saints. From this, it could be assumed that the Merchant wedded his wife purely for religious reasons.

It is also important to note that when listing the imperfections of his wife and their marriage, the Merchant fails to look inward at his own faults. He seeks to blame his wife for their unsuccessful marriage and there is no evidence that he ever considers that he may be partly to blame. This depicts the Merchant as a self-centred arrogant character.

Chaucer also illustrates the Merchant as an incredibly materialistic character. In the ‘General Prologue’ the reader gains the impression that image is very important to the Merchant. He is well dressed with fashionable motley coloured clothes, stylish Flemish beaver hat and expensive boots. After commenting that a wife is truly God’s own gift, the Merchant goes on to compare a wife to ‘londes, rentes, pasture, or commune, Or moebles, alle been yiftes of Fortune.’ (Lines 101/102). Despite trying to complement wives, the Merchant only displays how he thinks in terms of money, economics and property. He proceeds to describe a wife and her function in further detail:

‘She kepeth his good, and wasteth never a deel;

This indicates how the Merchant regards a wife as a servant who must succumb to his every wish and obey his every demand. He thinks of a wife as a possession, not as another human being or a lover.

Throughout ‘The Merchant’s Tale’ the Merchant constantly cites and refers to great classical philosophers, such as ‘Seneca’, to demonstrate his knowledge and make himself appear a learned man. The Merchant voices the opinions of Theophrastus, a philosopher renowned for his hatred of women. The Merchant cites how Theophrastus believes that ‘A trewe servant dooth moore diligence/ Thy good to kepe, than thyn owene wyf, For she wol claime half part al hir lyf.’ From reading ‘The Merchant’s Prologue’ we would assume that the Merchant would go on to express his approval of Theophrastus’ thoughts on wives. However, in line 98 the Merchant begs his audience to ‘Deffie Theofraste, and herke me.’ Chaucer’s liberal use of irony makes the reader dislike the Merchant’s character even further as we know that he does agree with the views of this philosopher and is therefore lying to his audience.

At the time in which Chaucer wrote ‘The Canterbury Tales’, Medieval society was very hierarchical. The merchants were a disruption of this hierarchy and were considered to be characters with no emotional or social life. Chaucer uses irony and cautious juxtaposition of key points to the Merchant so that, rather than gaining our sympathy, which is what the character craves, we despise him for his harsh language, his arrogance and his hypocritical, blasphemic state of mind.