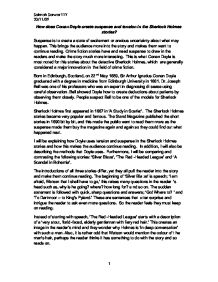 How does Conan Doyle create suspense and tension in the Sherlock Holmes stories?

How does Conan Doyle create suspense and tension in the Sherlock Holmes stories? Suspense is to create a state of excitement or anxious uncertainty about what may happen. This brings the audience more into the story and makes them want to continue reading. Crime fiction stories have and need suspense to draw in the readers and make the story much more interesting. This is what Conan Doyle is most noted for: his stories about the detective Sherlock Holmes, which are generally considered a major innovation in the field of crime fiction. Born in Edinburgh, Scotland, on 22nd May 1859, Sir Arthur Ignatius Conan Doyle graduated with a degree in medicine from Edinburgh University in 1881. Dr. Joseph Bell was one of his professors who was an expert in diagnosing disease using careful observation. Bell showed Doyle how to create deductions about patients by observing them closely. People suspect Bell to be one of the models for Sherlock Holmes. Sherlock Holmes first appeared in 1887 in 'A Study in Scarlet'. The Sherlock Holmes stories became very popular and famous. The Stand Magazine published the short stories in 1890 bit by bit, and this made the public want to read them more as the suspense made them buy the magazine again and again so they could find out what happened next. ...read more.

In 'Silver Blaze' there is a paragraph on page 18 ("Why should he take the horse out of the stable?...") where Holmes is asking a lot of questions, this makes the reader understand Holmes's intelligence, that he does not overlook the things that we may consider small. In addition, it also makes the reader ask themselves the questions and try to work it out for themselves. Once again they feel like they are working beside the detective. Something that builds tension in the story is how Holmes and Watson are always talking about the case but never about the actual conclusion itself, more like dodging around the issue and never really reaching the conclusion until the end. Also, Holmes will know something that Watson and the reader don't, but he doesn't reveal it until he feels it is the right time. For instance when Holmes goes to see Silas Brown and 'Holmes leaned forward and whispered something in the trainer's ear. He (Silas Brown) started violently and flushed to the temples.' We do not know what was whispered in Brown's ear, yet we know whatever Holmes said must be shocking as Brown was very surprised and went red in the face. Watson, and the readers, are ignorant in regard as to what happened. ...read more.

The reader would usually expect another character to be shocked as Holmes is usually one step ahead all the time. Holmes tells the King that 'from what i have seen of the lady she seems indeed to be on a very different level to your majesty.' Here Holmes is saying that even though Irene Adler is of a different status to the King and Holmes, she is very clever and has out-witted Holmes and also she is smart for keeping the photograph for future use. 'The Red-Headed League' and 'A Scandal in Bohemia' contrast as Holmes knew what was going to happen before the crime was even committed in 'The Red-Headed League' whereas he was outsmarted in 'A Scandal in Bohemia'. Conan Doyle's style of writing is particularly sophisticated, humorous, perplexing and successful. Even though the structure of the stories is very similar, the storylines differ greatly and in spite of using the same technique of structure throughout, his stories do not become boring. In conclusion, his techniques of generating suspense are effective, with tension being built into sections and into the structure of the stories and only broken at the end, and this suspense in his stories makes them appealing and enjoyable to read. ?? ?? ?? ?? Saimah Sarwar 11Y 20/11/09 1 ...read more.