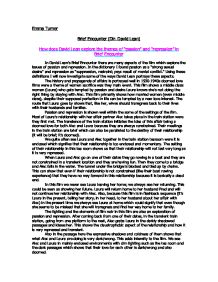 How does David Lean explore the themes of &quot;passion&quot; and &quot;repression&quot; in Brief Encounter.

Emma Turner Brief Encounter (Dir. David Lean) How does David Lean explore the themes of "passion" and "repression" in Brief Encounter In David Lean's Brief Encounter there are many aspects of the film which explore the issues of passion and repression. In the dictionary I found passion as a "strong sexual desire" and repression as "suppression, restraint; psyc result of mental conflict." Using these definitions I will now investigate some of the ways David Lean portrays these aspects. The history and propaganda of affairs is portrayed well in 1930-1940s doomed love films were a theme of women sacrifice was they main event. This film shows a middle class woman (Laura) who gets tempted by passion and desire Laura knows she's not doing the right thing by staying with Alec. This film primarily shows how married women (even middle class), despite their supposed perfection in life can be tempted by a new love interest. The route that Laura goes by shows that, like her, wives should transgress back to their lives with their husbands and families. Passion and repression is shown well within the some of the settings of the film. Most of Laura's relationship with her affair partner Alec takes place in the train station were they first met. The transience of the train station initiates the idea of this affair being a doomed love for both Alec and Laura because they are always constrained. ...read more.

Also in the passage here the expressive shadows and coldness of them shows that what Alec and Laura are doing is very dark/wrong. This adds intensity to the film. We see Alec and Laura in mainly enclosed environments with dim lighting such as the tea room and the dark passages which shows that their love for each other is dark/wrong and also doomed. In this film one of the focus points is the significance of the train. This can be seen to connote desire and danger by the speed that the train is going. For example when Alec grabs Laura and kisses her in the passage from one train platform to another a train rushes past at that precise moment. This suggests a momentary rush of passion and danger of being caught which intensifies the desire. This is the same for each time they kiss except for once at the end. When they kiss a train always goes past in a rush. On the other hand the last time they kiss at the end the train behind them is departing slowly. From the established motif of the train from this part of the film it shows that the passion for each other is dying and their realisation that the affair should not go on is setting in. ...read more.

Laura's hats would have been seen as ridiculous. This ridiculousness of the hats can parallel to the ridiculousness of her and Alec's relationship; that it is ridiculous to think that it will work out. This could be an able idea to put forward since when we see Laura in the home environment with Fred she does not wear a hat which could indicate that this is the relationship she is supposed to be in. In addition the music that is played on the stereo is Rachmaninov which is a very emotional and turbulent piece which is parallel to Laura even when she shows great restraint. This music shows us that her relationship with Alec and her feelings in her mind are very tense and that she is feeling an intense guilt because she is betraying Fred. In the end Laura regresses to back to Fred still feeling intense guilt. The message in this film is that even through great passion women will always go back to their husbands; into the security of the home. There is a choice in this situation but the ones who go back to their husbands are better off. The message is that they should ignore the feelings of passion and regress back to their security. David Lean uses passion and repression as great themes and through the film shows that a passionate, repressive affair is more trouble than it is worth, and for women, this means going back to the safe haven of their home. ...read more.