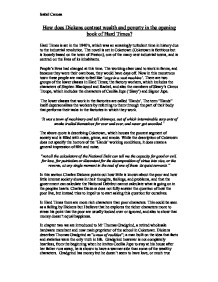 How does Dickens contrast wealth and poverty in the opening book of Hard Times?

How does Dickens contrast wealth and poverty in the opening book of Hard Times? Hard Times is set in the 1840's, which was an amazingly turbulent time in history due to the industrial revolution. The novel is set in Coketown (Coketown is fictitious but is loosely based on the town of Preston), one of the many new industrial towns, and is centred on the lives of its inhabitants. People's lives had changed at this time. The working class used to work in farms, and because they were their own boss, they would have days off. Now in this monstrous town these people are made to feel like 'cogs in a vast machine'. There are two groups of the lower classes in Hard Times; the factory workers, which includes the characters of Stephen Blackpool and Rachel, and also the members of Sleary's Circus Troupe, which includes the characters of Cecilia Jupe ('Sissy') and Signor Jupe. The lower classes that work in the factories are called 'Hands'. The term "Hands" itself depersonalizes the workers by referring to them through the part of their body that performs their tasks in the factories in which they work. 'It was a town of machinery and tall chimneys, out of which interminable serpents of smoke trailed themselves for ever and ever, and never got uncoiled.' ...read more.

Stephen Blackpool is introduced after we have met the Gradgrind family and Bounderby, and he provides a stark contrast to these earlier characters. He is one of the 'Hands' in Bounderby's factory, and he lives a life of drudgery and poverty. In spite of the hardships of his daily life, Stephen strives to maintain his honesty, integrity, faith, and compassion. Stephen is an important character because his poverty and virtue contrast with Bounderby's wealth and self-interest. Stephen is married to an alcoholic who isn't given a name but is almost described as a monster: 'Such a woman! A disabled, drunken creature, barely able to preserve her sitting posture by steadying herself with one begrimed hand on the floor, while the other was so purposeless in trying to bush her tangled hair from her face, that it only blinded her the more with the dirt upon it' In contrast to this awful woman Stephen is in fact in love with an angelic woman called Rachel who is also a 'Hand'. In contrast to Stephen's wife, Rachael embodies the qualities that she possesses none of; she is compassionate, honest, sensitive, morally pure, and generous. Indeed, she represents the Victorian ideal of femininity. It is largely because of these qualities that Stephen frequently refers to her as his 'angel'. ...read more.

Stephen and Rachel may be poor but they have each other, they have a sense of compassion for other people, and because of this they are able to find pleasure in there monotonous and plighted life. They show that without the virtues of compassion and imagination, life would be unbearable. Sissy and the other entertainers are also impoverished, but they have fire in their souls and this gives them a huge advantage over the wealthier characters. Gradgrind and Bounderby have the money but they don't have the joy. Due to their father's unfeeling nature the Gradgrind children have grown up without sentiment, this has resulted in them being damaged; they are always rubbing themselves almost as if they are trying to remove the pain which they feel. The children who have grown up with ought money are far happier than the ones who grew up with money. By coming into the Gradgrind household Sissy has already made a change occur within the family, they seem to be realising that tenderness and affection are more important than wealth. Charles Dickens is trying to make the reader ask themselves what is more important, spiritual or material wealth? His view is that spiritual wealth, portrayed by the lower classes, is far more important than material wealth, portrayed by the upper classes. If love does not exist in this world then the people who live on it will be mere zombies. Money when compared to love looses its value. Isabel Canosa ...read more.