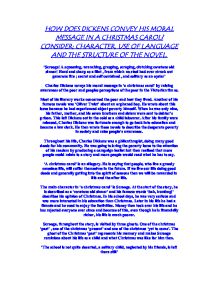 How Does Dickens Convey His Moral Message In a Christmas Carol?

HOW DOES DICKENS CONVEY HIS MORAL MESSAGE IN A CHRISTMAS CAROL? CONSIDER; CHARACTER, USE OF LANGUAGE AND THE STRUCTURE OF THE NOVEL. 'Scrooge! A squeezing, wrenching, grasping, scraping, clutching covetous old sinner! Hard and sharp as a flint , from which no steel had ever struck out generous fire ; secret and self contained , and solitary as an oyster' Charles Dickens coveys his moral message in 'a christmas carol' by raising awareness of the poor and peoples perceptions of the poor in the Victorian times. Most of his literary works concerned the poor and how they lived. Another of his famous novels was 'Oliver Twist' about an orphaned boy. He wrote about this issue because he had experienced abject poverty himself. When he was only nine, his father, mother, and his seven brothers and sisters were sent to debtor's prison. This left Dickens out in the cold as a child labourer. After his family were released, Charles Dickens was fortunate enough to go back into education and became a law clerk. He then wrote these novels to describe the desperate poverty in society and raise people's awareness. Throughout his life, Charles Dickens was a philanthropist, doing many good deeds for his community. He was going to bring the poverty issue to the attention of his readers by producing a campaign leaflet but then realised that more people could relate to a story and more people would read what he has to say. 'A christmas carol' is an allegory. He is saying that people, who live a greedy senseless life, will suffer themselves in the future. If we live our life doing good deeds and generally getting into the spirit of seasons then we will be rewarded in life and the after life. The main character in 'a christmas carol' is Scrooge. At the start of the story, he is described as a 'covetous old sinner' and his famous words 'bah, humbug!' ...read more.

"I wear the chain I forged in life," replied the ghost. 'I made it link by link and yard by yard; I girded it on my own free will, and of my own free will I wore it. Is its pattern strange to you?" Marley portrays a message that he has received punishment for his actions towards people when he was alive and that Scrooge could stop this happening to him. Marley and Scrooge are very alike. Now Marley is dead, Scrooge runs the business and is very strict towards his employees. This first thing we notice is his harsh treatment towards Bob Cratchit, a clerk to the accountants. The measly wages that Scrooge gave him was barely enough for him and his family to survive on and because of his poor wages, Bob couldn't afford to pay for his sons, Tiny Tim's treatment. But this family is still in the Christmas spirit and Bob remains loyal to Scrooge throughout. Scrooge just classifies Bob as an employee but Bob has a heart of gold. He is the one to Speak up to Scrooge when he or any of the other employees had a problem. 'A poor excuse for picking a man's pocket every twenty- fifth of December!' said Scrooge, buttoning his great coat to the chin. 'But I suppose you must have a whole day. Be here all earlier the next morning'. This is the one occasion where he is kind to his employees even if he does it grudgingly. At the end of the story, Scrooge gives Bob Cratchit a pay rise and he gives money to help Tiny Tim who is then cured of his illness. Scrooge is selfish, doesn't care for anyone else but himself. In his opinion, no-one works harder than he does and he feels he deserves respect for that, but respect from others isn't displayed when they move away from him, but Scrooge doesn't care. ...read more.

Marley tells us this. He is in chains; he is suffering for his past demeanours in his living life. All of the characters have a hidden meaning to them, Fred represents kindness and fun, Tiny Tim depicts suffering, representing the poor and needy. The voice of Charles Dickens can be heard in the story as it is written in the third person. He is speaking directly to us as the narrator of the story. Dickens gives us information about the characters that can't be spoken by the characters themselves. He 'ties up lose ends'. 'The mention of Marley's funeral brings me back to the point I started from. There is no doubt that Marley was dead.' From this quote we can see that Charles Dickens was talking directly to the audience of his novel and this makes the reader feel more involved in the story, encouraging further reading and understanding and wanting to know the conclusion of the story. The purpose of this novella is to raise awareness of the poor and the way they live and their treatment at the hands of the rich and uncaring. He adds the moral to push his message across to the masses. The story is very successful. It was written a long time ago, but people are still reading and accepting the moral message of this novella. If the story doesn't make the reader act, at least it makes them think. It gathers sympathy for Tiny Tim and hate for Scrooge. It makes the reader emotional- sad, angry, finally happy. So many people must have read this book that Scrooge has become a household name, symbolic of greed and loathing. Scrooge's phrase, 'Bah Humbug" depicts a person who will not participate in celebrations and fun activities. If Charles Dickens was alive today I think he would be pleased that his message is still being read and received. 'Scrooge was better than his word. He did it all, and infinitely more; and to Tiny Tim who did NOT die, he was a second father.' 'God bless us, everyone' ...read more.