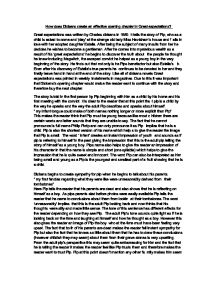 How does Dickens create an effective opening chapter in Great expectations?

How does Dickens create an effective opening chapter in Great expectations? Great expectations was written by Charles dickens in 1860. It tells the story of Pip, who as a child is asked to come and 'play' at the strange old lady Miss Havisham's house and falls in love with her adopted daughter Estella. After being the subject of many insults from her he decides he wishes to become a gentleman. After he comes into mysterious wealth as a result of his 'great expectations' he begins to discover the truth about the people he thought he knew including Magwitch, the escaped convict he helped as a young boy in the very beginning of the story. He finds out that not only is he Pips benefactor but also Estella's b. Even after his discovery of Estella's true parents he continues to be devoted to her and they finally leave hand in hand at the end of the story. Like all of dickens novels Great expectations was printed in weekly instalments in magazines. Due to this it was important that Dickens's opening chapter would make the reader want to continue with the story and therefore buy the next chapter. The story is told in the first person by Pip beginning with him as a child by his home and his first meeting with the convict. It is clear to the reader that at this point that pip is a child by the way he speaks and the way the adult Pip describes and speaks about himself. " my infant tongue could make of both names nothing longer or more explicit than Pip" This makes the reader think that Pip must be young because like most children there are certain words and letter sounds that they are unable to say. The fact that he cannot pronounce is full name Philip Pirrip and can only pronounce it as Pip implies that he is a child. ...read more.

This still creates sympathy for Pip because so many terrible things are happening to him. The convict wants to scare Pip into doing what he wants " A boy may lock his door may be warm in bed, may tuck himself up, may draw the clothes over his head, may think himself comfortable and safe, but that young man will softly creep and creep his way to him and tear him open."At this point Magwitch is being very manipulative and is scaring Pip into thinking that someone he cant see or hear can see and hear him. His description is so vivid that it may also make the reader feel uneasy as if they too are being watched. Dickens creates tension with the steady build up of short actions that result in him suddenly being killed. He lists every possible thing that Pip may try to do to escape and explaining how they won't work and that Pip is unable to escape which will leave Pip feeling completely helpless. The fact that he uses Pip's home as the setting for this grim death which is the one place Pip should feel safe will make Pip feel trapped and that he is in danger wherever he goes. The convict is looking into the mind of a child and has picked the scenario most children fear. This is very cruel which shows how desperate he is but could also show that magwitch has had contact with children as he knows what they fear. This concept is very disturbing and as was evident from previous descriptions Pip's imagination is already going wild. The length of the detail could be because magwitch has done what he is describing or has seen someone else do it whilst in prison. Pip's imagination and descriptions create more images of the convict " he looked into my young eyes as if he were eluding the hands of the dead people, stretching up cautiously out of their graves to get a twist upon his ankle and pull him in." ...read more.

Dickens leaves the reader to ponder the connection between the pip and the convict. "so that his eyes looked most powerfully into mine, and mine looked most helplessly into his" This quote helps to develop the plot by showing both a clear contrast between pip and the convict in both size and control but also showing a connection between the characters which is implied by the eye-contact. It shows the power the convict has over pip right now and his life late r in the story. At this point neither pip nor the reader knows the significance of this encounter but dickens subtle hints encourage the reader to read on to see what importance it has. Dickens finishes the chapter leaving the reader questioning as to whether pip survives. " you bring them to me at the old battery over yonder . you do it and you never dare say a word or dare make a sign concerning your having seen such a person as me and you shall be let to live." To have a successful opening chapter it needed to be gripping and in order to make the reader want to read on it needed to raise some questions that the reader would want answered and leave them open. Dickens successfully achieves this by leaving the reader unsure whether or not pip will do what is asked of him. The first impression created of magwitch is that he will not hesitate to harm pip and if the reader believes pip doesn't not die they will be left to wonder why this meeting with the convict is so important. The setting gives the impression of the gothic horror genre " on the edge of the river I could faintly make out the only two black things in all the that seemed to be standing upright: one of these was the beacon by which the sails steered...an ugly thing when you were near it .. the other a gibbet that had once held a pirate." The chapter begins with pip alone in the graveyard and it ends the dame way. ...read more.