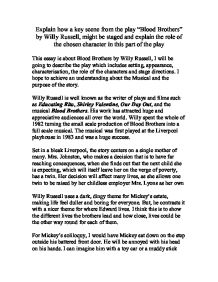 How Does Dickens Create Sympathy for His Characters in the Opening Extract of &quot;Great Expectations&quot;?

Explain how a key scene from the play "Blood Brothers" by Willy Russell, might be staged and explain the role of the chosen character in this part of the play This essay is about Blood Brothers by Willy Russell, I will be going to describe the play which includes setting, appearance, characterisation, the role of the characters and stage directions. I hope to achieve an understanding about the Musical and the purpose of the story. Willy Russell is well known as the writer of plays and films such as Educating Rita, Shirley Valentine, Our Day Out, and the musical Blood Brothers. His work has attracted huge and appreciative audiences all over the world. Willy spent the whole of 1982 turning the small scale production of Blood Brothers into a full scale musical. The musical was first played at the Liverpool playhouse in 1983 and was a huge success. Set in a bleak Liverpool, the story centers on a single mother of many. Mrs. Johnston, who makes a decision that is to have far reaching consequences, when she finds out that the next child she is expecting, which will itself leave her on the verge of poverty, has a twin. Her decision will affect many lives, as she allows one twin to be raised by her childless employer Mrs. ...read more.

Also to bring the play Humor although there is poverty and a baby being given away, to establish conflict and a plot. Also to make the audience curious about the story line. The character I am going to focus on is Mickey because he has a rougher background and more interesting story behind him. At the end of Mickey's soliloquy the stage directions say, "Bored and Petulant, Mickey sits and shoots an imaginary Sammy. Edward, also aged "seven" appears. He is bright and forthcoming." I would have Mickey looking bored, but I think he should be mocking Sammy with jealousy. The next set of stage directions are involving Edward with his sweets. Mickey asks for one and Edward allows him to take one. Mickey will be careful and suspicious because he has taken notice that Sammy is deceitful, and it's rare you actually get given a sweet. Mickey will then examine the sweet before he actually puts it in his mouth. Towards the end of the scene, I will have directions of Mickey putting his arm around Edward, as they start to bond with each other. When Sammy enters the scene, Mickey will actually be a little scared of him although he is kind of an idol towards him. ...read more.

Maybe Sammy can have a toy gun, Mickey can have a toy car, and Edward will have a bag of sweets. I will have dramatic, intense music as they declare themselves blood brothers and when they read the pledge because, this is the biggest, most ironic scene in the play. This scene in Blood Brothers is a very important part of the play. The boy's first meet at the age of seven and bond extremely well, also they declare themselves "Blood Brothers" which is funny and ironic because they actually are, Blood Brothers. Also the two different characteristics they both possess play hugely. The scene shows that lives could have been completely differently for each other, for example, Mickey could have been called Edward, and the other way round. It also shows how society is, this links with the themes Willy Russell uses. Additionally this story line creates a massive comedy, with funny lines, being unaware of there factual relationship which they both have. Each boy represents society in contradictory ways; Mickey represents the working-class of society, while on the other hand Edward represents the upper-class. Towards the end of the scene it gets a little more serious, Mrs. Johnstone enters. Mickey tells his Mum that they are Brothers. Mrs. Johnstone is shocked until he mentions that they are "Blood Brother". She can't let anyone know what she has done because she has kind of sold her baby. ...read more.