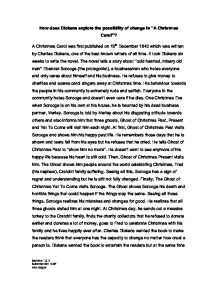 How does Dickens explore the possibility of change in A Christmas Carol?

How does Dickens explore the possibility of change in ''A Christmas Carol''? A Christmas Carol was first published on 19th December 1843 which was written by Charles Dickens, one of the best known writers of all time. It took Dickens six weeks to write the novel. The novel tells a story about ''cold hearted, misery old man'' Ebenzer Scrooge (the protagonist), a businessman who hates everyone and only cares about himself and his business. He refuses to give money to charities and scares carol singers away at Christmas time. His behaviour towards the people in his community is extremely rude and selfish. Everyone in the community hates Scrooge and doesn't even care if he dies. One Christmas Eve when Scrooge is on his own at his house, he is haunted by his dead business partner, Marley. Scrooge is told by Marley about his disgusting attitude towards others and also informs him that three ghosts, Ghost of Christmas Past, Present and Yet To Come will visit him each night. At first, Ghost of Christmas Past visits Scrooge and shows him his happy past life. He remembers those days that he is shown and tears fall from his eyes but he refuses that he cried. ...read more.

We then meet Scrooge in a scene where Scrooge's nephew, Fred comes to his workplace. Fred is described as 'handsome, sparkling eyes and whose face was ruddy' whilst, Scrooge is described as ''secret, self-contained and solitary as an oyster''. The reader can clearly see the contrast between the two. At this part, the reader can also imagine that Scrooge is not that interested in Christmas and wants to be left alone most of the time. This comes clear when Fred says 'Merry Christmas! Uncle' and Scrooge respond by saying 'Bah! Humbug!' which is a phrase created by Charles Dickens to represent the annoyance and bad temper of Scrooge. Scrooge rejects the dining proposal from Fred by repeating 'Good Afternoon' after every sentence he says. This is Scrooge's way of saying 'I've had enough of you. Now get out!' Secondly, we meet Scrooge again at his workplace with a charity fundraiser who kindly asks Scrooge for a small amount of money to feed the poor people but the reply from Scrooge to that again is 'Bah! Humbug!' This again shows that Scrooge doesn't care about no one else rather than him and his business. He also says that charity is 'not my business...it's enough for a man to understand his own business, and not to interfere with other people's. Mine occupies me constantly.' ...read more.

We also see ''good'' repeated several times at the end of the stave 5. This word contrasts with Scrooge in stave 1 of how cruel he was. Every word that came out of his mouth was negative. He always said ''No''. But now He is ''good'', he ''chuckles till he cries'' and ''laughs''. This really shows that Scrooge is a changed man and his mind is always positive. Visiting his nephew at Christmas day, giving town's people turkey and raising Bob Cratchit's salary shows the reader that the Scrooge's transformation is completed. We know this because In stave 1, Scrooge was always in his own world, towns people avoided talking to him, everyone knew he was cruel and selfish. But in stave 5, Scrooge is all nice, happy and thrilled. He wants to spend Christmas with his closest family; he raises Cratchit's salary which helps Tiny Tim live. He is a life saver. He cares about other people and most importantly, he realizes his mistakes when he describes the donation to the charity as ''a great many back payments''. I think that the clear message that Dickens is trying to tell the readers is that everyone can make millions of mistakes but no matter how nasty people are, everyone can change to a good one even though you don't expect them to be. ?? ?? ?? ?? Section 1 & 2 Subarna Rai 10AP Miss Edgar ...read more.