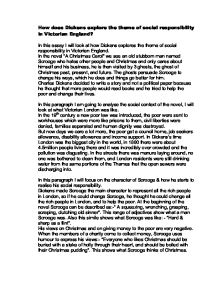 How does Dickens explore the theme of social responsibility in Victorian England?

How does Dickens explore the theme of social responsibility in Victorian England? In this essay I will look at how Dickens explores the theme of social responsibility in Victorian England. In the novel "A Christmas Carol" we see an old stubborn man named Scrooge who hates other people and Christmas and only cares about himself and his business, he is then visited by 3 ghosts, the ghost of Christmas past, present, and future. The ghosts persuade Scrooge to change his ways, which he does and things go better for him. Charles Dickens decided to write a story and not a political paper because he thought that more people would read books and he tried to help the poor and change their lives. In this paragraph I am going to analyse the social context of the novel, I will look at what Victorian London was like. In the 19th century a new poor law was introduced, the poor were sent to workhouses which were more like prisons to them, civil liberties were denied, families separated and human dignity was destroyed. But now days we care a lot more, the poor get a council home, job seekers allowance, disability allowance and income support. ...read more.

This shows Scrooge starting to think of other people, and how badly he treated Bob Crachet. After that suddenly Scrooge breaks up with Belle(Scrooge's girl friend), Belle says:- "But if you were free today, tomorrow, yesterday can even I believe that you would choose a dowerless girl". This shows that Belle is letting Scrooge go, because he will not get a dowery, a dowery is when the father of the bride gives the husband money to take her away. Also a few years later, Belle had a child with someone:- "He thought that such another creature, quite as graceful and as full of promise, might have called him father". This shows that Scrooge regrets breaking up with Belle, and wants he to be her husband, and the child's father, so Scrooge is very jealous. In this paragraph I am going to analyse the character of Tiny Tim and why he is significant. When Tiny Tim enters he is described as:- "Alas for Tiny Tim, he bore a little wooden crutch, and had his limbs supported by an iron frame". This shows that Tiny Tim is disabled and can't look after himself. ...read more.

Then in the present, where it shows Scrooge a greedy old sinner, only caring about himself and his business. And finally in the future Dickens uses a very powerful image, two coffins lay in a graveyard, one with Tiny Tim's name, and one with Scrooge's name, Dickens is trying to show that if Scrooge does not change his wicked ways, there will be harsh consequences in the future to come. Also the image of ignorance & want is very effective because they represent all of mankind's sins. In this paragraph I will sum up the techniques Dickens uses to explore social responsibility and conclude on this essay. Dickens uses a wide range of techniques to explore social responsibility, but the best one was when he showed Scrooge's past, present, and future. This made Scrooge realise what he was doing and how badly he was treating people. This technique is effective as it has an impact on the reader and would maybe make the reader think about their social responsibility and how they treat others. I think Dickens did achieve what he set out to do, because if you look now a days in London, England, the poor are treated better, they are given a home, food and some money. ...read more.