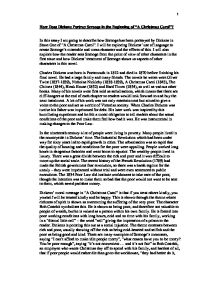 How Does Dickens Portray Scrooge in the Beginning of &quot;A Christmas Carol&quot;?

How Does Dickens Portray Scrooge in the Beginning of "A Christmas Carol"? In this essay I am going to describe how Scrooge has been portrayed by Dickens in Stave One of "A Christmas Carol". I will be exploring Dickens' use of language to create Scrooge's miserable and mean character and the effects of this. I will also explore how the reader sees Scrooge from the point of view of other characters in the first stave and how Dickens' treatment of Scrooge shows us aspects of other characters in this novel. Charles Dickens was born in Portsmouth in 1812 and died in 1870 before finishing his final novel. He had a large family and many friends. The novels he wrote were Oliver Twist (1837-1839), Nicholas Nickleby (1838-1839), A Christmas Carol (1843), The Chimes (1844), Bleak House (1852) and Hard Times (1854), as well as various other books. Many of his novels were first sold as serialisations, which means that there are cliff-hangers at the end of each chapter so readers would look forward to and buy the next instalment. A lot of his work was not only entertainment but aimed to give a voice to the poor and act as a critic of Victorian society. When Charles Dickens was twelve his father was imprisoned for debt. His later work was inspired by this humiliating experience and he felt a moral obligation to tell readers about the actual conditions of the poor and make them feel how bad it was. ...read more.

He is very selfish; he says "You'll want the day off tomorrow?" to Bob Cratchit, his underpaid employee, not wishing to give him time off even on Christmas day. Dickens uses specific language to show the reader what Scrooge is like as a character, and how other people see him, e.g. his nephew, who thinks he has the wrong attitude to Christmas and the poor. "What right do you have to be morose? You're rich enough." But his nephew keeps his temper and doesn't let Scrooge's bad temper affect him, "I'll keep my Christmas humour to the last. So A Merry Christmas, uncle!" Even strangers in the street felt Scrooge was cold and evil and kept their distance: "Nobody ever stopped him in the street", "warning all human sympathy to keep his distance". The charity collectors expected him to give money to the needy at Christmas because he was a businessman, but he was just angry and heartless. "Want is keenly felt and abundance rejoices. What shall I put you down for?" "Nothing." Scrooge would rather see the poor die and "decrease the surplus" population or go to prison than give money to them. The weather is also symbolic of Scrooge's attitude, "It was cold, bleak, biting weather". Scrooge is cold like the winter. Scrooge's appearance is described as cold, dark and angry, using descriptive words "squeezing, wrenching, grasping, clutching, covetous old sinner" and similes like "hard and sharp as a flint" and "solitary as an oyster". ...read more.

"Bah! Humbug" is no longer used in this sense. Calling someone a humbug today means that they are a hypocrite. "A Christmas Carol" is divided into five "staves" instead of chapters. This is a musical word and it suggests that Dickens was thinking of the book as a musical work like a symphony. It is a linear story, which moves from exposition (Scrooge's character, his situation, the introduction of the ghost theme) to complication (the three middle staves, introducing the three ghosts and showing Scrooge where he is going wrong), climax (where his character actually changes) and then resolution. In the resolution at the end we have a happy ending typical of a Victorian novel, where Scrooge sees the error of his ways and changes into a kind and charitable man. Most Victorian novels follow this straightforward structure. In conclusion, Dickens sets his character against the life and morals of Victorian England, and deliberately makes him an opposite of what all the readers would want him to be, so that there can be a great contrast as he learns the lesson, which is meant to work on the readers as well. Scrooge is shown to be miserable, lonely, miserly and selfish. This contrasts with the life we are shown of Bob Cratchit's family, which manages to be happy although they are poor. The story gives a strong moral message to the readers, telling them that if they are charitable and kind to people who are less fortunate, they will become happier themselves. 1 ...read more.