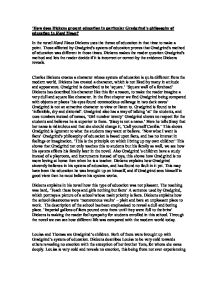 'How does Dickens present education in particular Gradgrind's philosophy of education in Hard Times? In the novel Hard Times Dickens uses the theme of education in that time to make a point. Those affected by Gradgrind's system of education proves that Gradgrind's method of education was different in those times. Dickens makes the reader question Gradgrind's method and lets the reader decide if it is incorrect or correct by the evidence Dickens reveals. Charles Dickens creates a character whose system of education is quite different from the modern world. Dickens has created a character, which is not liked by many in attitude and appearance. Gradgrind is described to be 'square.' 'Square wall of a forehead' Dickens has described his character like this for a reason, to make the reader imagine a very dull and square like character. In the first chapter we find Gradgrind being compared with objects or places 'his eyes found commodious cellarage in two dark caves' Gradgrind is not an attractive character to view or listen to. Gradgrind is found to be 'inflexible, dry and dictorial'. Gradgrind also has a way of talking 'at' the students, and uses numbers instead of names, 'Girl number twenty' Gradgrind shows no respect for the students and believes he is superior to them. 'Sissy is not a name.' Here he tells Sissy that her name is ridiculous and that she should change it, 'Call yourself Cecilia.' This shows Gradgrind is ignorant to what the students may want or believe. 'Now what I want is facts' Gradgrind's philosophy of education is based upon facts, and has no interest in feelings or imagination. ...read more.

Bitzer's mechanical reproduction of facts is the approved product of Gradgrind's system of education. Sissy helps Louisa to understand her feelings. By Sissy being herself and not being affected by Gradgrind's system of education, she indirectly shows Louisa there is a different side to the world. 'Sissy, why do I hate you?' Louisa envy's Sissy for not having been crammed with facts and Louisa sees how she herself could have been, if it had not been for her fathers system of education. Sissy is there for Louisa when Louisa is confused about James Harthouse. Sissy takes the problem into her own hands, and helps Louisa out of the situation. This shows initiative on Sissy's part, because Louisa could not figure out what she wanted because of the way she was brought up. What dickens is showing is how these two characters are very different because of Gradgrind's system of education, because Louisa is affected by the education we see how she is unable to cope with difficult situations. Where as due to the fact that Sissy is not affected she finds it easier to cope. Louisa having never been courted, had never experience relationships or encountered love. So the first man her father suggested who wanted to marry her, she accepted. Louisa, being similar to her father weighed up the pros and the cons of marrying Bounderby and found it the correct thing to do. Louisa did not marry Bounderby for love. Louisa wanted to please her father by marrying his friend who Gradgrind thought highly of. Bounderby had money and a home and could provide for Louisa and also she could be near Tom most of the time, In Louisa's eyes, Tom was the only thing to keep her going. ...read more.

We see how the education in the novel hard times was difficult and similar to the monitorial system. We see how Louisa and Thomas both resent the way they have been brought up, but they react to the system of education in different ways. Dickens explains how Sissy and Bitzer are two different characters, Sissy being warm and loving and Bitzer being cold and heartless. Sissy and Louisa are also different characters, we see how sissy helps Louisa to understand her feelings and helps her through a difficult situation. When Louisa marries Bounderby we know it is not for love but for her brother Tom and her father, we see how Louisa's bringing up has effected her decision to marry Bounderby. How she has turned out unhappy and blames her father because of her unhappiness. Tom's development as an adult is shown to be affected by his childhood, Tom only cares about what is best for him, he is quite the opposite to Bitzer, who turned out quite cold and un-caring because of his education, Bitzer is all facts. Sissy has turned out better than the others around her, this being because she was immune to Gradgrinds system of eductation- this is showing the reader that people who did not encounter the education were better off. In the end Gradgrind realises he has made a terrible mistake and has learnt his lesson the hard way. His children are unhappy because of his method of teaching his students have not benefited from the education. Gradgrind realises his failure as a father and a teacher. We find out that Sissy was not a failure in learning with this type of education but the education itself was a failure. ...read more.