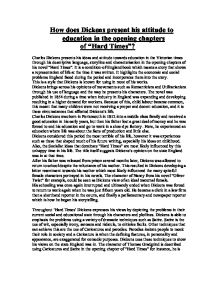 How does Dickens present his attitudes to education in the opening chapters of hard times?

How does Dickens present his attitude to education in the opening chapters of "Hard Times"? Charles Dickens presents his ideas and attitude towards education in the Victorian times through his descriptive language, storyline and characterisation in the opening chapters of his novel "Hard Times". It is a condition-of-England book which means a story that shows a representation of life at the time it was written. It highlights the economic and social problems England faced during the period and incorporates them into the story. This is a style that Dickens is known for using in most of his works. Dickens brings across his opinions of movements such as Romanticism and Utilitarianism through his use of language and the way he presents his characters. The novel was published in 1854 during a time when industry in England was expanding and developing resulting in a higher demand for workers. Because of this, child labour became common, this meant that many children were not receiving a proper and decent education, and it is these circumstances that affected Dickens's life. Charles Dickens was born in Portsmouth in 1812 into a middle class family and received a good education in his early years, but then his father lost a great deal of money and he was forced to end his education and go to work in a shoe-dye factory . Here, he experienced an education where life was about the facts of production and little else. Dickens considered this period the most terrible of his life, however it was experiences such as these that shaped much of his future writing, especially his ideas on childhood. Also, the Socialist ideas that dominate "Hard Times" are most likely influenced by this unhappy time in his life. The title itself suggests Dickens's opinion on the state England was in at that time. After his father was released from prison several months later, Dickens was allowed to return to school despite the reluctance of his mother. ...read more.

The title of the first chapter is 'The One Thing Needful' which is a religious reference implying that the love and teaching of Jesus is needed for a person to develop. Dickens tries to convey that this idea is an important factor in the education system but how more is needed than just facts. The 'One' could imply how Gradgrind only thinks one thing is important when it comes to teaching, that being fact. Dickens also uses Gradgrind to show how the Victorian 's believed people were formed by facts into a specific role in society, 'you can only form the minds of reasoning animals upon facts'. Dickens uses a variety of techniques shown through characters such as Gradgrind to show floors in the education system. During the first two chapters of 'Hard Times' Dickens is able to show the effect the education system has on children. Gradrind says to Sissy Jupe when talking about having pictures of flowers on a carpet or on wall paper, "what is called Taste is only another name for Fact", his opinion is that if you would not walk on flowers in real life then there is no point or sense in having them on a carpet; "And is that why you would put tables and chairs upon them, and have people walking over them'. This gives the impression that beauty and creativity is not encouraged or looked upon highly in the Victorian era. Also this could be a metaphor illustrating how children are like flowers, natural and untouched but the education system tramples on their imagination and creativity, causing them to be damaged like the flowers would be. Dickens uses such metaphors to portray his ideas about how learning can be like imagination being destroyed, this can be shown as well in the way the children are constantly referred to as 'vessels' and numbers. Describing the children as vessels gives the impression that the children start off completely empty and then are filled to the brim with nothing but facts leaving no room for anything else. ...read more.

and drawing models, were all at the ends of his ten chilled fingers'. Dickens portrays M'Choakumchild to have a variety of talents but due to the long listing it can create the impression that these are just titles and he has no real intelligence and once again he is a product of the education system himself. Dickens furthers this point by implying that M'Choakumchild has little talent in teaching, ''If he had only learnt a little less, how infinitely better he might have taught". Dickens illustrates his views that it is not how much fact is known but it is the way in which it must be taught that is the importance in teaching children. Dickens believed children should be taught in a way that their ideas are encouraged rather than suppressed to develop their sense of character and allow them to fulfil their full potential. Throughout 'Hard Times' Dickens portrays his ideas on education and how he believed there was a problem that should be addressed. From the text it can be concluded that Dickens believed that the education system is a based around ideas of paternalism and Utilitarianism. Dickens uses characters such as the Inspector, Mr M'Choakumchild and Thomas Gradgrind to portray how this is done in a class room to prepare children for a life of factory work. He then uses the characters Sissy and Bitzer to illustrate how the education system affects the children, in ways that it suppresses imagination and creativity to enforce only facts. The character of Sissy is used to show Dicken's views of how if the idea of romanticism was used then children would develop into people with morals and allow them to be happy in themselves and acquire true intelligence. Overall Dickens uses a variety of techniques to develop characters which are able to portray the ideas he has on the Victorian education system. To conclude, Dickens successfully portrays his views on the Victorian education system by using a range of techniques and through his use of characterisation. By Chelsea Cleveland-Hurley ...read more.