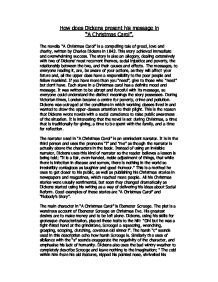 How does Dickens present his message in

How does Dickens present his message in "A Christmas Carol". The novella "A Christmas Carol" is a compelling tale of greed, love and charity, written by Charles Dickens in 1843. This story achieved immediate and overwhelming success. The story is also an allegory, dealing extensively with two of Dickens' most recurrent themes, social injustice and poverty, the relationship between the two, and their causes and effects. The messages, to everyone reading it, are, be aware of your actions, as they will affect your future and, all the upper class have a responsibility to the poor people and fellow mankind. If you have more than you "need", give to those who "need" but don't have. Each stave in a Christmas carol has a definite mood and message. It was written to be abrupt and forceful with its message, so everyone could understand the distinct meanings the story possesses. During Victorian times, London became a centre for poverty, crime and pollution. Dickens was outraged at the conditions in which working classes lived in and wanted to draw the upper-classes attention to their plight. This is the reason that Dickens wrote novels with a social conscience to raise public awareness of the situation. It is interesting that the novel is set during Christmas, a time that is traditionally for giving, a time to be spent with the family, and a time for reflection. ...read more.

Using this imagery Dickens is stressing that human beings have free choice in the way they live and behave towards others, and to ignore one's duties to one's fellow man comes at great cost to one's spirit. The ghost of Christmas Past's sole purpose is to show Scrooge he is responsible for the life he now leads and his lonely and difficult past, as a child, as a young adult, and his gradual decline into the life he now leads, the life of a miser. The spirit carries with it a snuffer cap; "he seized the extinguisher cap, and by a sudden action pressed it down upon it's head". This symbolises all the memories from Scrooge's past, which he will never be able to get rid of. It is with this ghost, that Scrooge first begins to succumb to self-realisation, and how his actions should be changed in the future, and everything that he did wrong in the past. The second spirit, the ghost of Christmas Present is full of good cheer and blessings. This spirit also wears a scabbard which is caked in rust; "girded around its middle was an antique scabbard; but no sword was in it, and the ancient sheath was eaten up with rust". This implies a symbol of peace, and this ghost represents all that is good about Christmas. ...read more.

Scrooge, on the other hand, does not notice that it is cold. This is a symbol of Scrooge's cold heart. The weather reiterates this point. The warming of his heart is symbolized by his allowing Cratchit to buy another coal scuttle at the end of the book, and making the fires a lot bigger. Dickens uses weather and inanimate objects often to symbolize bigger ideas. Life is given to things like doorknockers, and meaning is given to weather. There is a reason for everything, and this is one of the reasons that Dickens is such a successful writer. Dickens had his own experiences of poverty, his father was sent to a debtor's prison, when Dickens was a boy. He felt very strongly about the plight of the poor, and wanted to help them. He tried many ways to get his message across, by talking and by writing. He succeeded in the fact that "A Christmas Carol" is still very popular today, and people continue to make films and plays about it. There are already so many famous phrases from A Christmas Carol that we use, such as "God bless us, every one", that will live on for generations. His thinly disguised message railing against social and economic injustice was well taken, and Dickens' work has become a cornerstone of classical literature as a result of it. ...read more.