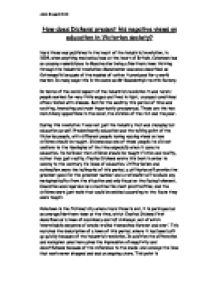 How does Dickens present his negative views on education in Victorian society?

How does Dickens present his negative views on education in Victorian society? Hard times was published in the heart of the industrial revolution, in 1854, when anything mechanical was at the heart of Britain. Coketown has an uncanny resemblance to Manchester being a Northern town thriving through the industrial revolution; Manchester was once described as Cottonopolis because of the masses of cotton it produced for a world market. In many ways this is the same as Mr Bounderby's textile factory. In terms of the social aspect of the industrial revolution it was harsh; people worked for very little wages and lived in tight, cramped conditions often riddled with disease. But for the wealthy this period of time was exciting, innovating and most importantly prosperous. These are the two main binary oppositions in the novel, the division of the rich and the poor. During this revolution it was not just the industry that was changing but education as well. Predominantly education was the talking point of the Victorian people, with different people having varying views on how children should be taught. Dickens was one of these people; he did not conform to the ideologies of the time especially when it came to education. He believed that children should be taught fiction and reality, rather than just reality. Charles Dickens wrote this book in order to convey to the contrary his ideas of education. ...read more.

Finally, the schoolroom is described as a vault, a place, by definition, where something is locked to keep valuables. These valuables are the facts that are being taught and the children that are privileged enough to be in education at the time. The description moves on in vivid detail regarding 'the speaker' (Mr Gradgrind). His appearance; 'square forefinger' and 'square wall of a forehead', a square is the first shape you learn and is not fanciful with its 4 exactly equal straight edges, a square can also be seen as quite robotic and without any passion. Dickens then describes the speakers eyes as 'two dark caves', a metaphor that immediately conjures up negativity, and gives the impression that this is a man that is withdrawn from his emotions because the eyes are said to be the windows to the soul, and you can often tell a persons emotions just by looking into their eyes. The description is then rounded off talking about his head being 'like the crust of a plum pie, as if the head had scarcely warehouse-room for the hard facts stored inside'. This simile is used to great effect because with a plum pie comes oozing just like the facts oozing out of Mr Gradgrind's bald head. A warehouse-room is also mentioned, this relates to the industrial time where things were measured by the room as things were growing so quickly. ...read more.

comes from the circus and cannot understand the devotion to fact. During the class she is unable to define a horse after Mr Gradgrind has tried to find an answer to the mystery of the title for the job of Sissy's father. Then we are introduced to Bitzer a strongly spoken pupil who is able to define a horse with as many facts as only Mr Gradgrind could out-fact. In conclusion as a result of the exhausting exposure to fact Mr Gradgrind gradually learns that all this fact is not good for the pupil. An example of this is his own daughter, she had been stuffed full of facts so much that when she should have felt emotion she couldn't she did not know what to feel. Bitzer also had this reaction, as he had no feelings for anyone by the end of the novel in terms of other people's emotions, Bitzer was unable to read into them and determine what they meant. Dickens secretly criticises Gradgrind's utilitarian views, as every person is different, it is not just like a machine where all the produce is exactly equal to the first and the last. Furthermore the novel is riddled with bible passages, which could be seen as ironic, as Christianity, has not been proven by fact nor can we disregard it at a fictional story. Religion is the bridge, bridging the gap between Fact and Fancy. Gradgrind's religion was to facts and in the end he lost faith. ?? ?? ?? ?? Alex Russell X10 ...read more.