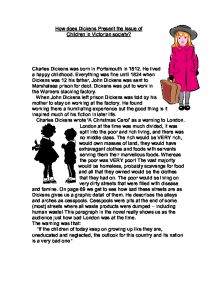 How does Dickens Present the Issue of Children in Victorian society?

How does Dickens Present the Issue of Children in Victorian society? Charles Dickens was born in Portsmouth in 1812. He lived a happy childhood. Everything was fine until 1824 when Dickens was 12 his father, John Dickens was sent to Marshalsea prison for debt. Dickens was put to work in the Warners blacking factory. When John Dickens left prison Dickens was told by his mother to stay on working at the factory. He found working there a humiliating experience but the good thing is it inspired much of his fiction in later life. Charles Dickens wrote 'A Christmas Carol' as a warning to London. London at the time was much divided, it was split into the poor and rich living, and there was no middle class. The rich would be VERY rich, would own masses of land, they would have extravagant clothes and foods with servants serving them their marvellous foods. Whereas the poor was VERY poor! The vast majority would be homeless, probably scavenge for food and all that they owned would be the clothes that they had on. ...read more.

He describes the place as damp, mossy, dreary - all these words are negative points. This shows us how depressing it must have been on the students e.g. Scrooge. The boarding school has had a dramatic impact in Scrooges life and has made Scrooge the way he is! His personality reflects the description of the school - the cold/upsetting environment has left Scrooge with a cold/icy personality. Dickens uses three ghosts to tell the story they show us the past, present and future of Scrooges life. The 1st ghost - Past This ghost takes us back to Scrooges time at boarding school, it shows him alone and neglected as other children go home for Christmas with their warm, loving families. Scrooge is described as a solitary child neglected by his friends (pg 26.) The ghost also shows that after Scrooge leaves school he is very mean and because he is very lonely his only 'friend' is his money. We can see this in a scene with his girlfriend as he has to decide love of money, he chooses money and once again he is alone. ...read more.

They then see other people talking about what they have stolen from this dead man, just to get some money. Somebody has even stolen the sheets he was lying on. This shows that nobody really cares about the man that has died! This ghost shows Scrooge the Cratchit family again but they are no longer happy and cheery this is because Tiny Tim has passed away due to the poverty. Finally the ghost shows Scrooge a gravestone with his name on it, this when Scrooge realises that nobody does car about him and that he is alone. He has caused the suffering of the Cratchit's with his evil greedy ways! Scrooge wakes up on Christmas day and changes who he is and helps Tiny Tim and the Cratchit's. I think that this story works very well because look where we are today, there is no longer much harsh poverty and all children are now educated in England. So I believe that this novel could have played a huge part in this transformation because I woke people up to just how bad things were going to be. Charles Dickens passed away suddenly in 1870 without finishing his final novel 'The Mystery of Edwin Drood' ...read more.