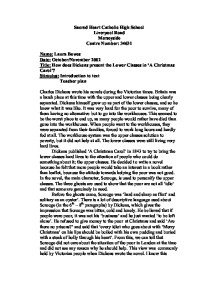 How does Dickens present the Lower Classes in 'A Christmas Carol'?

Sacred Heart Catholic High School Liverpool Road Merseyside Centre Number: 34631 Name: Laura Bowes Date: October/November 2002 Title: How does Dickens present the Lower Classes in 'A Christmas Carol'? Stimulus: Introduction to text Teacher plan Charles Dickens wrote his novels during the Victorian times. Britain was a harsh place at this time with the upper and lower classes being clearly separated. Dickens himself grew up as part of the lower classes, and so he knew what it was like. It was very hard for the poor to survive, many of them having no alternative but to go into the workhouses. This seemed to be the worst place to end up, as many people would rather have died than gone into the workhouses. When people went to the workhouses, they were separated from their families, forced to work long hours and hardly fed at all. The workhouse system was the upper classes solution to poverty, but it did not help at all. The lower classes were still living very hard lives. Dickens published 'A Christmas Carol' in 1843 to try to bring the lower classes hard lives to the attention of people who could do something about it; the upper classes. ...read more.

The way they acted about the goose would have made you think that it was 'the rarest of all birds'. We can see that they are excited about having goose for dinner, probably because they were not used to eating meat, as they probably could not afford it. In a way, it could be seen as the way in which the family came together at Christmas and looked forward to it because it was a chance for them to have a reasonably expensive meal and appreciate it, as it did not happen everyday. Through the Cratchit family, Dickens also tries to show that although the upper classes may think that the lower classes are insignificant, and that it would be better if some of them died to decrease the huge population, but if they actually saw a family in which someone was dying through being poor, they would quickly change their minds. He shows this when Scrooge sees Tiny Tim (Bob Cratchits son, who is a cripple) and is told that he will probably die soon. Scrooge instantly tries to ask the ghost if the boy will be spared, but the ghost quotes what Scrooge said when he was asked to give money to the poor: 'If he be like to die, he better do it, and decrease the surplus population'. ...read more.

people are not that different and have the same reactions towards poverty and wealth; the two extremes. These streets contrast dramatically to the streets shown by the 'Ghost of Christmas Present'. I think that Dickens is also trying to make people think that if they do not change their ways, then the poor people who still have some dignity, who were shown by the 'Ghost of Christmas Present', will also eventually become so desperate, that the seedy, dirty London that is shown by the 'Ghost of Christmas Yet to Come' is what the whole city will end up like. Dickens presents the lower classes realistically; he does not try to make out that all poor people are kind hearted. He tries to make the upper classes realise that the situation of the poor can only get better if they do something to help. He also tries to make the reader feel concerned about Tiny Tim and show the upper classes that they can help; when Tiny Tim is mentioned, it is almost like a personal appeal to the reader to help someone in need. Dickens presents the lower classes effectively and this is probably why the book is still very popular today. ...read more.