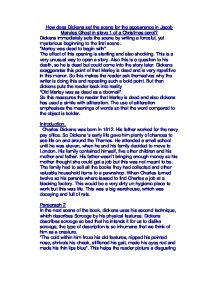 How does Dickens set the scene for the appearance in Jacob Maryles Ghost in stave 1 of a Christmas carol?

How does Dickens set the scene for the appearance in Jacob Maryles Ghost in stave 1 of a Christmas carol? Dickens immediately sets the scene by writing a forceful, yet mysterious beginning to the first scene. "Marley was dead to begin with" The effect of this opening is startling and also shocking. This is a very unusual way to open a story. Also this is a question to his death, so he is dead but could come into the story later. Dickens exaggerates this point of that Marley is dead and is very repetitive in this manor. So this makes the reader ask themselves why the writer is doing this and repeating such a bold point. But then dickens puts the reader back into reality "Old Marley was as dead as a doornail". So this reassures the reader that Marley is dead and also dickens has used a simile with alliteration. The use of alliteration emphasises the meanings of words so that the word compared to the object is bolder. Introduction. Charles Dickens was born in 1812. His father worked for the navy pay office. So Dickens 's early life gave him plenty of chances to see life on and around the Thames. He attended a small school until he was eleven, when he and his family decided to move to London. ...read more.

Paragraph 3 A further method by which Dickens prepares us for the ghostly vision of Marley's face on Scooge's door is how he describes the setting outside Scrooges counting house. In the next scene dickens describes the setting of a Christmas carol. Dickens uses the fact that Marley is dead and describes the setting in an unusual way. First dickens describes the setting as dark, damp and gloomy. This is a very different contrast to a normal Christmas, which is light, snowy and sunny. The reader wonders why dickens does this, because this is totally opposite to what Christmas is really like. Another technique that dickens uses is personification "It was cold, bleak, biting weather". This doesn't really happen because the cold isn't really biting scrooge it's that it is so cold it feels as if you are being bitten. This is effective because the reader can tell how cold the weather is. There is also another hint to that a ghost will appear because when Dickens uses metaphors he writes "The fog came pouring in at every chink and keyhole, and was so dense without, that, although the court was of the narrowest, the houses opposite were mere phantoms". This indicates another perfect setting for a ghost to appear so this shows dickens wants the reader to know or think that. ...read more.

Paragraph 5 In the next section Dickens builds up tension of when the reader thinks a ghost will appear. The scene starts off with Scrooge walking home after he has locked up his business and he is walking home. Dickens builds up the tension by describing the scene as "Gloomy" and " The fog and frost so hung about the black old gateway of the house" and again this is setting a perfect scene for a ghost. Scrooge has his key in the door and he looks at the knocker on the door and he notices its Marley's face. The face is described as horrific and the knocker is at eye level so Scrooge cannot ignore this 'phenomenon'. The face must have been scary because this was Marley and he was dead so his face must have been decaying therefor making the face more obscene. I think Dickens uses this effect of tension and anticipation to shock the reader for when Marley's face appears on the doorknocker. Also this is the first climax in the novel and is shocking because the reader might not expect this. While Scrooge is shocked in the 'moment' he keeps on looking and this 'phenomenon' it becomes a knocker again. Dickens uses this to shock the reader and because of Marleys sudden disappearance the reader may believe he could come back to haunt, this evil disobedient character soon. ...read more.