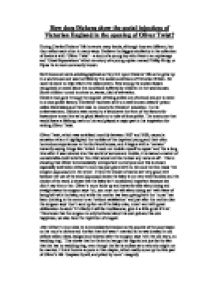 How does Dickens show the social injustices of Victorian England in the opening of Oliver Twist?

How does Dickens show the social injustices of Victorian England in the opening of Oliver Twist? During Charles Dickens' life he wrote many books, although they are different, but they reflect each other in many ways. I believe the biggest similarity in his collection of books is with 'Oliver Twist' - a story of a young boy who lives in an orphanage and 'Great Expectations' which is a story of a young orphan named Phillip Pirrip, or Pip as he is more commonly known. Both books are semi-autobiographical as they hint upon Dickens' life as he grew up in a workhouse and was horrified by the social conditions of Victorian Britain. He used his work to help reform the class system. Few among the social classes recognised or cared about the conditions suffered by children in the workhouses. Some children turned to crime or, worse, died of starvation. Dickens had gone through the anguish of being pulled out of school and put to work in a shoe-polish factory. His father had been sent to a well known debtors' prison called Marshalsea and there was no money for Dickens' education. To his embarrassment, Dickens was moved to a window at the front of the factory for bystanders to see him as he glued labels on to tubs of shoe polish. ...read more.

Eventually the starving boys decide that one of them will ask for more at the next meal and they come up with a way of deciding it and, as it turns out, Oliver gets the short straw and ends up saying 'Please sir, I want some more'. Mr Bumble almost can't believe what Oliver has said and his face turns pale and he stumbles and clings for support. This is one of the most important parts of Oliver's life because it changes the path of his life completely. Straight away he is marched down to the market by Mr Bumble - offering Oliver together with five pounds. Eventually they come across Mr Gamfield, a vicious chimney-sweep who offers to take Oliver on as an apprentice for 5 pounds which is later lowered to 3. Mr. Bumble, Mr. Gamfield, and Oliver appear before a magistrate to sign the documents for Oliver to be taken. At the last minute, when he was looking for his inkbottle to sign the document, the magistrate notices Oliver's pale face. He asks the boy why he looks so petrified. Oliver tells the magistrate that he would rather be beaten or killed rather than being an apprentice to Mr. ...read more.

Eventually the shop owner from outside where the robbery took place comes in and says it wasn't Oliver but another boy - all the charges are dropped. Mr Brownlow decides to adopt Oliver and all the parts of Olivers life are falling right into place. It then gets even better when Mr Brownlow comes across a necklace that he gave to his niece for her 18th birthday - one that was taken off her by a drunk nurse at her death when she gave birth to young Oliver. Fagin is still not convinced that Oliver won't tell the police of his wearabouts so they decide to kidnapp Oliver, which completley rips his troubled life apart, just as it was beginning to come-together. Unlike other characters throughout the book Nancy is not entirely good. She has battles between her inner conscience and her devotion to Bill Sykes. Nancy cares for Oliver so overwhelmingly she tries to take Oliver back to Mr Brownlow and it results in her death. Eventually Bill Sykes is killed trying to escape after everybody comes to try to save Oliver. This book changed peoples opinion towards the poor and the rich people loved reading it and couldn't wait for the next issue to come out every month. ...read more.