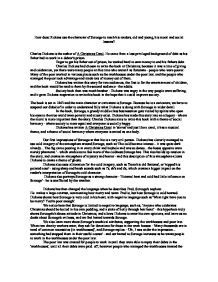 How does Dickens use the character of Scrooge to teach his readers, old and young, his moral and social lessons?

How does Dickens use the character of Scrooge to teach his readers, old and young, his moral and social lessons? Charles Dickens is the author of A Christmas Carol. He came from a less privileged background of debt as his father had to work in a debtor's prison. Eager to get his father out of prison, he worked hard to earn money to end his fathers debt. Charles Dickens had chosen to write the book at Christmas, because it was a time of giving and celebration, yet there were many people at this time who weren't as fortunate - people who were poorer. Many of the poor worked in various places such as the workhouses under the poor law, and the people who managed the poor took advantage and made lots of money out of them. Dickens has written this story for two audiences, the first is for the entertainment of children, and the book would be read to them by the second audience - the adults. Society back then was much harsher - Dickens was angry in the way people were suffering, and it gave Dickens inspiration to write this book in the hope that it could improve society. The book is set in 1843 and the main character or caricature is Scrooge. Because he is a caricature, we have to suspend our disbelief in order to understand fully what Dickens is doing with Scrooge in wider detail. In the book, Scrooge, a greedy middle class businessmen gets visited by spirits who open his eyes to the true world were poverty and misery exist. Dickens has made this story into an allegory - where the moral is more important than the story. Charles Dickens aims to write this book with a theme of social harmony - where society is more equal and everyone is socially happy. Dickens has written A Christmas Carol in 'staves' and just like a carol, it has a musical theme, and a theme of social harmony where everyone is united as one body. ...read more.

When everyone has left the scene, Scrooge is sad, and he says "I should be able to say a word or two to my clerk just now" - which shows how he is feeling sorry to Crachit because of the way he has been treating him - Scrooge is realising his mistakes and trying to learn from them. The Ghost then takes us a few years into the future, where Scrooge is sitting with his fianc�e, Belle. At the time, Scrooge was struggling with his business, and Belle was upset, - 'Your own feeling tells you that you were not what you are' - because she realised that they could not get married - Scrooge had became more money-orientated. Belle said to Scrooge "It matters little. To you very little. Another idol has displaced me" - she says this because it shows Scrooge does not care about his love for Belle, also calling their relationship "an unprofitable dream" - Scrooge just cared about his money. Dickens shows to us a message that if put money first in life, you will receive no love. Scrooge is in an heartbroken state, revisiting painful memories of parting with his fianc�e. He says to the Spirit - "Spirit! Show me no more!... Why do you delight to torture me?... Remove me from this place" - which shows he doesn't want to relive the memories When Scrooge refers to the Spirits visit as "torture", it shows how Scrooge does not want to acknowledge these events really happened in his past (because of his immense suffering) - and the Spirit says to Scrooge "These are shadows of things that have been. They are what they are" - but in order for Scrooge to move on, he has to admit to these wrong doings and change for the better of society. The Ghost of Christmas past has shown what Scrooge has lost in his life - love, a relationship, family - and we can now empathise with him, and hope he changes. ...read more.

Dickens believed that the meaning of Christmas should be rediscovered - how Christmas is a time where people celebrate each others company, a time full of fun and laughter for all- however it seems that in the modern twenty-first century, we celebrate Christmas with gifts and presents, but it is more important to celebrate it because it is a time of fun and laughter, and value what we take for granted, such as family, and friends. There is a critical theory within the story, of how it contains characteristics of a Shakespearean tragedy. Dickens wrote this allegory in five acts, just like many of Shakespeare's greatest tragedies, such as Macbeth or Julius Caesar. Aristotle, a great ancient Greek philosopher said that a tragedy has to consist of several unities. Aristotle's 'poetics' said there had to be a unity of i) Time - this story was based over one night. ii) Place - it was all in the same area iii) Character - the story was all based around Scrooge iv) Action - In the end, everything gets resolved. This could also be an inversion of a Shakespearean tragedy, as in the end the play ends on a light note. In this way, Dickens offers the reader hope to turn the events of a tragedy on its head. Conclusion: A Christmas Carol shows to us a message on two levels. On a first level it shows how if you don't change, you will die and go to hell and die. However if you are able to help not just yourself, but society as well, there is a hope of society changing on a wider level for the better - and less suffering overall. I think Dickens has successfully managed to teach his readers moral and social lessons from the book. Young readers can learn of the suffering of society, and help those suffering in society. The older readers can learn that there is hope, whatever position you are in - rich or poor - you have the ability to help others and change society for the better. ?? ?? ?? ?? ...read more.