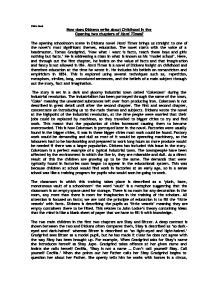 How does Dickens write about Childhood In the Opening two chapters of Hard Times?

How does Dickens write about Childhood In the Opening two chapters of Hard Times? The opening schoolroom scene in Dickens novel Hard Times brings us straight to one of the novel's most significant themes, education. The novel starts with the voice of a headmaster, Tomas Gradgrind, 'Now what I want is facts, teach these boys and girls nothing but facts.' He is addressing a class in what is known as his 'model school'. Here, and through out the first chapter, he insists on the value of facts and that imagination and fancy is not allowed in life. Hard Times is a novel of Dickens insight on childhood and therefore education at the time he wrote it. He includes his beliefs on romanticism and empiricism in 1854. This is explored using several techniques such as, repetition, metaphors, similes, long, convoluted sentences, and the beliefs of a main subject through out the story, fact and imagination. The story is set in a dark and gloomy industrial town called 'Coketown' during the industrial revolution. The industrialism has been portrayed through the name of the town, 'Coke' meaning the unwanted substances left over from producing iron. Coketown is not described in great detail until after the second chapter. The first and second chapter, concentrate on introducing us to the main themes and subjects. Dickens wrote the novel at the highpoint of the industrial revolution, at the time people were worried that their jobs could be replaced by machines, so they travelled to bigger cities to try and find work. ...read more.

Bitzer seems very bleak, like the rest of the townspeople, but Sissy seems more colourful and imaginative as deeper words and colours are used to describe her. Sissy is one of Dickens's heroines; she is pure and innocent. She is immediately associated with heavenly light and I are told the ray of light 'irradiated' her. Both Sissy and Bitzer are seen later on in the novel, Sissy a lot more than Bitzer. But Gradgrind has taken in Sissy, as her father abandoned her, she is now a friend to him and his family. Bitzer is not seen a lot, he was involved in the attempted arrest of Gradgrind and has therefore betrayed Gradgrind. Bitzer's character never fully develops, he is unfeeling and unimaginative from the beginning to the end. We are first introduced to Gradgrind's voice at the start of the novel. He is teaching a large class with his sentiments about facts and the need for a pragmatic view of the world, this for him is what a sound education is all about. His appearance is threatening and unattractive, he is accompanied by two other adults, a schoolmaster, the other anonymous. The first description Dickens gives of Gradgrind uses repetition and builds an image of a bold, stern man straight away, 'The emphasis was helped by the speaker's square wall of a forehead ...The emphasis was helped by the speaker's mouth...The emphasis was helped by the speaker's voice...The emphasis was helped by the speaker's hair...' ...read more.

The school itself is described as a factory, 'He and some one hundred and forty other schoolmasters, had been lately turned at the same time, in the same factory...' This is what really built the image of the school up for me. It sounds as though the whole education system was made to run like a factory. The pupils are the machines and the teaches are the workers, like men and women who operate machinery are only useful to their masters for this, M'Choakumchild is only useful to Gradgrind because he is so full of facts. Dickens believed that children should have an imagination, he was a romanticist. He wrote Hard Times at a time were everyone believed in empiricism, it was very different from other novels that were wrote at the time. Dickens has used characters to represent empiricism, for example Tomas Gradgrind, as he has with characters representing romanticism, for example Sissy Jupe. Dickens dedicated Hard Times to a philosopher friend of his, Tomas Carlyle, who felt very strongly that society was threatened by industrialism. In 1892 he made the following statement, "It is the age of machinery in every outward and inward sense of that word. Nothing is now done directly by hand; all is by rule and calculated contrivance ... Men are grown mechanical in heard and in heart, as well as in hand." Throughout Hard Times Dickens refers to the workers as 'Hands', men and women who are only important to their masters because they can manage machines. We can see that Hard Times reflects the issues in Carlyle's statement, the themes of industrialism and everything following fact. Claire Boal ...read more.