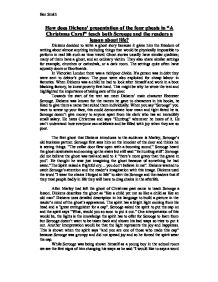 How does Dickens presentation of the four ghosts in A Christmas Carol teach both Scrooge and the readers a lesson about life?

How does Dickens’ presentation of the four ghosts in “A Christmas Carol” teach both Scrooge and the readers a lesson about life?

Dickens decided to write a ghost story because it gives him the freedom of writing about almost anything including things that would be physically impossible to perform in real life such as time travel. Ghost stories usually have similar qualities; many of them have a ghost, and an ordinary victim. They also share similar settings for example, churches or cathedrals, or a dark room. The settings quite often have squeaky doors or floorboards.

In Victorian London there was a rich/poor divide. If a person was in debt they were sent to debtor’s prison. The poor were also exploited for cheap labour in factories. When Dickens was a child he had to look after himself and work in a boot blacking factory, he knew poverty first hand. This might be why he wrote the text and highlighted the importance of taking care of the poor.

Towards the start of the text we meet Dickens’ main character Ebenezer Scrooge. Dickens was known for the names he gave to characters in his books, he liked to give them a name that suited them individually. When you say “Scrooge” you have to screw up your face, this could demonstrate how mean and tight fisted he is. Scrooge doesn’t give money to anyone apart from his clerk who has an incredibly small salary. He hates Christmas and says “Humbug” whenever he hears of it. He can’t understand how everyone can celebrate and be filled with joy when they are so poor.

The first ghost that Dickens introduces to the audience is Marley, Scrooge’s old business partner. Scrooge first sees him on the knocker of the door and thinks he is seeing things. “The cellar door flew open with a booming sound.” Scrooge heard the ghost downstairs and coming up the stairs but still said “its humbug still”. Scrooge did not believe the ghost was real and said to it “there’s more gravy than the grave in you”. He thought he was just imagining the ghost because of something he had eaten.”The Spirit raised a frightful cry… you don’t believe in me”. Dickens wanted to catch Scrooge’s attention and the reader’s imagination with this image. Dickens used the word “I wear the chains I forged in life” to alert the Scrooge and the readers that if they treat people badly in life they will have to drag chains in the afterlife.

After Marley had left the ghost of Christmas past came to teach Scrooge a lesson. Dickens describes the ghost as “like a child yet not so like a child as like an old man” Dickens uses detailed description in his language to build a picture in the reader’s mind of the ghost’s appearance. The spirit has a bright light coming from his head and a “great extinguisher for a cap”. Scrooge asked the spirit to put the cap on and the spirit says “What, would you so soon to put it out.” One interpretation of this would be, the lights is the knowledge the spirit has to offer for Scrooge to learn from but Scrooge doesn’t want to be taken back and shown his bad ways so tries to put it out. Another interpretation would be that the light represents the joy and happiness. This is shown when the spirit says “and you are one of those who made this cap” because Scrooge was grumpy and did not spread joy and so he forced the spirit wear the cap.

While Scrooge was being shown himself as a young boy in the school room we see the first signs of him changing his ways as he said “I would like to says a word or two to my clerk just now” and “there was a boy singing a Christmas carol I would have liked to given him something”.

The second of the tree spirits that visits Scrooge was the ghost of Christmas present. The ghost was “Surrounded by food” and “it’s genial face, it’s sparkling eye, it’s open hand.” When Dickens describes the food on the floor he uses a long list. “...turkey, geese, game, poultry, brawn, great joints of meat...” Dickens uses this technique to put emphasis on the amount of items. He also repeats words such as “and” for the same effect. The ghost shows Scrooge poor people celebrating, this demonstrates to the readers as well as Scrooge that you don’t need material gifts to have a good time, the most important thing is not to be lonely, like Scrooge. The ghost also shows Scrooge Bob Crachit’s house. When Scrooge asks the ghost if Tiny Tim will live or die the ghost quotes Scrooge “he’d better die and decrease the surplus population.” Scrooge is mortified by his own words. The ghost also shows Scrooge two personifications of “Ignorance and Want” Dickens was warning the readers that if you do not take care of the poor they will rise up and over through the government, this had just happened in France with the French Revolution.

The last ghost that Scrooge meets is the ghost of Christmas yet to come. The ghost was wearing a black cloak which covered all but one “outstretched hand”. The ghost shows Scrooge his own death and how nobody cares about him. “If he had been more natural (in his lifetime) he’d have someone to care for him when he was struck with death”, this shows the readers that if someone is tight fisted in their life then no one will care about them after they have died. Scrooge’s old partners say they will only go to the funeral if there is a good lunch. The spirit does not speak and just points to Scrooge’s tombstone, Scrooge promises to the spirit he will change his ways “in leaving I shall not leave this lesson”. After the ghost had left Scrooge he was “as merry as a drunken man”. He bought the Crachits a huge turkey, and then visited his nephew for a Christmas lunch. This shows Scrooge has learnt his lesson.

Dickens wrote the text with a very strong moral in his mind, the rich should give to the poor. This moral is still relevant today and probably always will be; as long as there are the rich there will be the poor. Dickens gets the message across very well using an array of different methods, from personification to detailed descriptions of the ghosts and the horror of the afterlife of those how don’t wish well to others in life. He wrote the text in such a way that even if you don’t believe in ghosts and an afterlife there is still a thought left in your mind after you read it that by performing some good deeds you might be saving yourself from suffering after death. No matter who reads the text Dickens makes them feel sorry for the poor and makes them feel they need to help out those how are less fortunate.