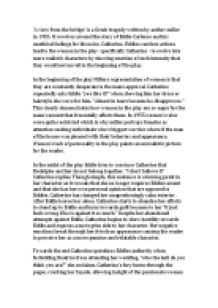 How does Eddie's behavior in &quot;A view from the bridge&quot; affect the female characters?

Transfer-Encoding: chunked ﻿?A view from the bridge? is a Greek tragedy written by author miller in 1955. It revolves around the story of Eddie Carbone and his unethical feelings for his neice, Catherine. Eddies careless actions lead to the women in the play- specifically Catherine - to evolve into more realistic characters by showing emotion of such intensity that they would not unveil in the beginning of the play. In the beginning of the play Millers representation of women is that they are constantly desperate to the mans approval. Catherine repeatedly asks Eddie ?you like it?? when showing him her dress or hairstyle she wore for him. ...read more.

Women?s lack of personality in the play paints an unrealistic picture for the reader. In the midst of the play Eddie tries to convince Catherine that Rodolpho and her do not belong together. ?I don?t believe it? Catherine replies. Though simple, this sentence is a turning point in her character as it reveals that she no longer requires Eddies assent and that she has her own personal opinion that are opposed to Eddies. Catherine has changed her unquestioningly calm exterior. After Eddie leaves her alone, Catherine starts to abandon her efforts to stand up to Eddie and turns towards guilt because to her ?it just feels wrong if he is against it so much.? ...read more.

In this scene Miller explores Catherine?s unleashed anger in response to Eddie rejecting her request for her mother figure to attend her wedding. This tells the reader that Catherine no longer seeks the approval of her Uncle and is disgusted by his behavior. In ?a view from the bridge? Eddie?s actions and behavior leads the women in the play to mature into more authentic characters with individual personalities including the good and bad of natural human behavior. To start, Eddies dismay would have had a huge impact of catherines emotions, however, near the end of the play she seems to have become more independent and confident in her ability to make her own decisions without the approval of Eddie. ...read more.