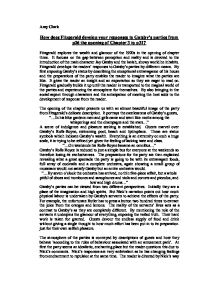 How does Fitzgerald develop your responses to Gatsby's parties from p26 the opening of Chapter 3 to p31?

Amy Clark How does Fitzgerald develop your responses to Gatsby's parties from p26 the opening of Chapter 3 to p31? Fitzgerald explores the wealth and glamour of the 1920s in the opening of chapter three. It focuses on the gap between perception and reality and is devoted to the introduction of the main character Jay Gatsby and the lavish, showy world he inhabits. Fitzgerald develops the readers' responses to Gatsby's parties by different means. By first exposing Gatsby's status by describing the exceptional extravagance of his house and the preparations of the party enables the reader to imagine what the parties are like. It gives the reader an insight and an expectation so they are eager to read on. Fitzgerald gradually builds it up until the reader is transported to the magical world of the parties and experiencing the atmosphere for themselves. By also bringing in the social aspect through characters and the anticipation of meeting the host adds to the development of response from the reader. The opening of the chapter presents us with an almost beautiful image of the party from Fitzgerald's delicate description. It portrays the carelessness of Gatsby's guests, "...In his blue gardens men and girls came and went like moths among the whisperings and the champagne and the stars..." ...read more.

At first the party seems an idealistic, enchanting place but the reader questions this due to Nick's comments. Nick's responses are very ambivalent as he has changing feelings from enchantment to repulsion at the same time. The reader is directed by Nick's way of thinking and begins to feel the same, realising that rather than just a scene of pure luxury it is in fact garish and illusory. Exchanges between guests show how artificial it is. "...casual innuendo and introductions forgotten on the spot, and enthusiastic meetings between women who never knew each other's names..." Relationships are very fragile and people are exceedingly shallow and superficial. As soon as they enter Gatsby's party they are living in a careless, alcohol fuelled world, which isn't very stable. Therefore giving a hint to the reader that something drastic is bound to happen. The amount of alcohol is apparent throughout the party scene, 'champagne was served in glasses bigger than finger-bowls'. The fact that alcohol is illegal doesn't seem to worry anyone and just adds to the excitement and revelry of it all. Gatsby's fortune is fuelling these parties. The party gives the first impression of exclusivity but really it is not. ...read more.

The gossip intensifies, as far as rumours saying that he has killed a man and that he was a spy in the war. The chapter continues to heighten the sense of anonymity and enigma that surrounds Gatsby and this mystery becomes the motivating question of the book. Unravelling of Gatsby's character becomes one of the novel's central mechanisms. Many aspects of Gatsby's world are intriguing because they seem slightly odd. For instance, he is the host of a spectacular party yet he knows hardly any of his guests. He chooses to remain separate from it all, he doesn't drink so he's always in control. Nick's impression of Gatsby emphasizes his optimism and vitality, he seems hopeful and has a belief in him for the future. Ultimately the reader can see through all the glamour and luxuriousness of the party and observe its artificial, self-indulgent gaudiness. Nick plays a huge role in exposing what the parties a truly like by his subtle comments, influencing the readers' response. On the surface the party can be a wonderful, magical place where you can be transported to ecstasy but underneath it is the complete opposite, full of vulgarity and falseness. It is very deceiving. Fitzgerald captures the Jazz era wonderfully revealing how people's lives at this time are without purpose, full of dissatisfaction and no direction. ...read more.