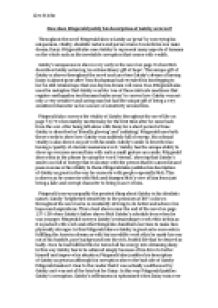 How does Fitzgerald justify his description of Gatsby as Great?

﻿Alex St John How does Fitzgerald justify his description of Gatsby as Great? Throughout the novel Fitzgerald shows Gatsby as ?great? by conveying his uniqueness, vitality, idealistic nature and perseverance towards his one main dream, Daisy. Fitzgerald also uses Gatsby to represent many aspects of humans on the whole such as the inevitable corruption that comes with wealth. Gatsby?s uniqueness is shown very early in the novel on page 8 when Nick describes Gatsby as having ?an extraordinary gift of hope?. This unique gift of Gatsby is shown throughout the novel such as when Gatsby?s dream of having Daisy is almost gone after Tom Buchannan had revealed his bootlegging to her he still retains hope that one day his dream will come true. Fitzgerald also uses the metaphor that Gatsby was like ?one of those intricate machines that register earthquakes ten thousand miles away? to convey how Gatsby was not only a very sensitive and caring man but had the unique gift of being a very sensitized character as he is aware of sensitivity around him. ...read more.

Fitzgerald also justifies his description of Gatsby as great in the way he connects with people especially Nick. This is shown as he connects with Nick and changes Nick?s view of him from just being a fake and corrupt character to being in awe of him. Fitzgerald conveys arguably the greatest thing about Gatsby in his idealistic nature, Gatsby ?heightened sensitivity to the promises of life? is shown throughout the novel as he is constantly striving to do better and achieve his hopes and aspirations. This is best shown near the end of the novel on page 137-138 when Gatsby?s father shows Nick Gatsby?s schedule from when he was younger. Fitzgerald conveys Gatsby?s extraordinary work ethic in this as it is packed with work and other things like dumbbell exercises to make him physically stronger. In this Fitzgerald shows Gatsby is great as he succeeds in fulfilling the America dream as with his incredible work ethic he made his way out of his humble, poor background into the rich, fruitful life that he desired so badly. ...read more.

Fitzgerald also justifies his description of Gatsby as ?great? by showing Gatsby?s perseverance towards his dream throughout the novel. His determination and perseverance are shown at the end of chapter 1 when we first see Gatsby and he had ?stretched out his arms? towards the green light on the end of Daisy?s porch. Fitzgerald shows in this that Gatsby is so determined to fulfill his dream that something as small and insignificant as a green light bears huge significance to him. The fact that he had stretched out his arms shows that he is yearning for something; he is not just yearning for Daisy but is yearning to go back in time to before the war when he was innocent before all of his corruption and bootlegging. Fitzgerald shows this yearning again on page 88 when Gatsby tells Nick ?can?t repeat the past, of course you can!? Gatsby?s aspirations are so high that when he actually gets Daisy he is shown to ?question his happiness?. ...read more.