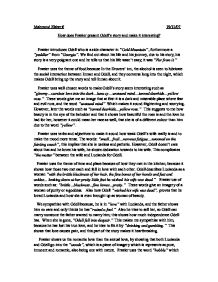 How does Frazier present Odell?

Mahmoud Elsherif 19/11/07 How does Frazier present Odell's story and make it interesting? Frazier introduces Odell who is a side character in "Cold Mountain", furthermore a "peddler" from "Georgia". We find out about his life and his journey, due to his story, his story is a very poignant one and he tells us that his life wasn't easy; it was "Far from it." Frazier uses the theme of food because In the Drovers' inn, the alcohol is seen to lubricate the social interaction between Inman and Odell, and they converse long into the night, which makes Odell bring up the story and tell Inman about it. Frazier uses well chosen words to make Odell's story seem interesting such as "gloomy...careless love into the dark...lunacy... unsound mind...tanned deerhide...yellow rose." These words give me an image that at first it is a dark and miserable place where fear and evil runs, and the word "unsound mind" Which makes it sound frightening and worrying. However, later the words such as "tanned deerhide...yellow rose." This suggests to me how beauty is in the eye of the beholder and that it shows how beautiful the rose is ...read more.

Also how Odell "wished his wife was dead", proves that he loved Lucianda and how she is even brought up as woman of beauty. We sympathise with Odell because, he is in "love" with Lucianda, and the father shows him no care and only thinks he has "raised a fool." Also he tries to sell her, so Odell can marry someone the father wanted to marry him; this shows how much independence Odell has. When she is gone, "Odell fell into despair." This makes me sympathise with him, because he has lost his true love, and he tries to fix it by "drinking and gambling." This shows that love causes pain, and this part of the story makes it heartbreaking. Frazier shows us the romantic love than the sexual love, by showing that both Lucianda and Odell go into the "woods", which is a piece of imagery which is represents as pure, innocent and romantic, also being one with nature. Frazier uses the word "hobble" which implies how Odell looks sly and cunning also makes people less suspicious of him, except the readers, who know what he is about to do. ...read more.

Frazier uses more sympathy as we read on, because when Odell leaves the shack, Frazier uses words such as: "staggered, out blinking, into the light." This gives us the imagery he is desperate for the "light" more importantly, he really wants to see his love, because he hasn't seen her for ages, and she is far away from him. Frazier shows the determination of love and how it brings denial, because Odell thinks Lucianda is alive, because he gets all of the "money...gold pieces...diamond...ruby brooch...emerald rings...pearls." This makes Odell use the jewels to bring more money for his journey, he sells "trinkets" to gain more money for himself, to look for his love. It shows that true love never dies and he is still looking for her. To conclude, this story is very poignant and it shows how Odell's life is far from easy, also it shows the theme of love and determination. The journey he makes nearer the end of Odell's story is similar to Inman's because they are both looking for their love (Ada in Inman's case) and they want to stay with them till their dying breaths, also the language that is used is very vivid and emotional. ...read more.