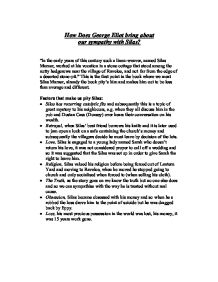 How Does George Eliot bring about our sympathy with Silas?

How Does George Eliot bring about our sympathy with Silas? "In the early years of this century such a linen-weaver, named Silas Marner, worked at his vocation in a stone cottage that stood among the nutty hedgerows near the village of Raveloe, and not far from the edge of a deserted stone-pit." This is the first point in the book where we meat Silas Marner, already the book pity's him and makes him out to be less than average and different. Factors that make us pity Silas: * Silas has recurring catalytic fits and subsequently this is a topic of great mystery to his neighbours, e.g. when they all discuss him in the pub and Dustan Cass (Dunsey) ...read more.

* Religion, Silas valued his religion before being forced out of Lantern Yard and moving to Raveloe, when he moved he stopped going to church and only socialised when forced to (when selling his cloth). * The Truth, as the story goes on we know the truth but no one else does and so we can sympathise with the way he is treated without real cause. * Obsession, Silas became obsessed with his money and so when he s robbed the loss drove him to the point of suicide but he was dragged back by Eppy. * Loss, his most precious possession in the world was lost, his money, it was 15 years work gone. ...read more.

In utter amazement he fell to his knees and bent his head low to examine the marvel: it was a sleeping child-a round, fair thing, with soft yellow rings all over its head." * Resolution, the discovery of Dunstan's Body through a new light on Silas' situation , what came with loss may go when found. There are many different factors to the pity Silas Marner gets, but in the day Silas Marner was written the world was a horrible place which pivoted on religion and was surrounded by no doubts about religion. I personally do not feel sorry for Silas Marner and as we read through the book became more aware that I hated the book and was bored out of my mind. I was forced to make constant notes because I couldn't remember any of the book because I disliked it so much. By Andrew Boxall ...read more.