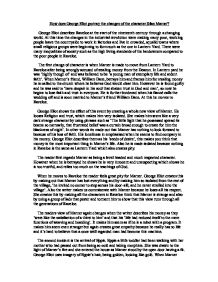 How does George Eliot portray the changes of the character Silas Marner?

How does George Eliot portray the changes of the character Silas Marner? George Eliot describes Raveloe at the start of the nineteenth century through a changing world. At this time the changes in the industrial revolution were making many poor, working people leave the countryside to work in factories and live in crowded, squalid towns where small religious groups were beginning to form such as the one in Lantern Yard. There were many inequalities of society such as the high living standards of the landowners compared to the poor people in Raveloe. The first change of character is when Marner is made to move from Lantern Yard to Raveloe after being wrongly accused of stealing money from the Deacon. In Lantern yard he was 'highly though of' and was believed to be 'a young man of exemplary life and ardent faith'. When Marner's friend, William Dane, betrays him and frames him for stealing money he is called to the church where he believes God would clear him. However he is found guilty and he was said to 'have despair in his soul that shaken trust in God and man', so now he begins to lose faith and trust in everyone. He is further burdened when his fianc� calls the wedding off and is soon married to Marner's friend William Dane. At this he moves to Raveloe. George Eliot shows the effect of this event by creating a whole new view of Marner. He looses Religion and trust, which makes him very isolated. ...read more.

Godfrey gives Marner some money to look after Eppie and states that Eppie is a 'Poor little thing'. This shows characters in the book still feel pity for Marner because they see the child as being a burden but or Silas the child is just what he needed. The reader feels hope for Marner at this point which contradicts the other characters views because only the reader knows hoe truly important the child is to Marner and how hopeless he would be if he didn't have anything in his life still. The final incident I have chosen is in the second part of the book that is sixteen years on from part one of the book. It is when Marner's gold is returned to him but is worthless compared to Eppie. Also Godfrey and Nancy (Godfrey's wife) went to see Marner and broke the news that Godfrey is Eppies biological father and that he wants her to move in with him. However Eppie will not go as she sees Marner as her father which the reader gets constant reminders of as she always refers to him as 'daddy' or 'father'. George Eliot shows a change in Marner again, as now he is a totally fulfilled character with money and Eppie. However Marner explains to Eppie 'how he used to count it every night, and his soul was utterly desolate till she was sent to him.' This portrays Silas as finally being an ordinary who wants and needs nothing else than Eppie. ...read more.

This is shown when Godfrey walks away from his only child and his ex-wife. It is also shown when Mrs Kimble won't take Eppie, 'Mrs Kimble, hesitating, how-ever to take those dingy clothes into contact with her own ornament satin bodice.' Also in incident two the writer wants us to show us the difference in class and how it effected the actions of those people. For example the higher class take pity on the lower class. This is shown by several offers of money to Marner. It also shows that the rich used money to get out of taking responsibilities. In incident three George Eliot wants us to think about the moral issue of class again. It seems ironic how Godfrey feels he has the right to own Eppie after Marner has been her father for sixteen years. She shows how the higher class expects respect from the lower class and the lower class seems to oblige to this expectation. This is shown in the brief quote 'Thank Mr. and Mrs. Cass.' The fact that Marner refers to Godfrey and Nancy as Mr and Mrs shows respect. The writer also wants us to think about the importance of money in the different classes. It seems much more important to Godfrey who uses it to try and bribe Eppie to leaving Marner; this also shows how money makes people think they have power. It used to be of most importance to Marner until he found Eppie. It makes us think about the moral that money is nothing if you don't have anyone to share it with. ...read more.