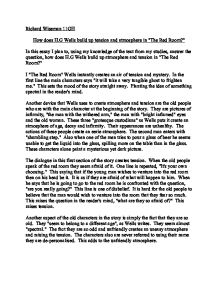 How does H.G Wells build up tension and atmosphere in &quot;The Red Room?&quot;

Richard Wiseman 11GH How does H.G Wells build up tension and atmosphere in "The Red Room?" In this essay I plan to, using my knowledge of the text from my studies, answer the question, how does H.G Wells build up atmosphere and tension in "The Red Room?" I "The Red Room" Wells instantly creates an air of tension and mystery. In the first line the main characters says "it will take a very tangible ghost to frighten me." This sets the mood of the story straight away. Planting the idea of something spectral in the reader's mind. Another device that Wells uses to create atmosphere and tension are the old people who are with the main character at the beginning of the story. They are pictures of infirmity, "the man with the withered arm," the man with "bright inflamed" eyes and the old woman. These three "grotesque custodians" as Wells puts it create an atmosphere of age, decay and infirmity. Their appearances are unhealthy. The actions of these people create an eerie atmosphere. The second man enters with "shambling step." Also when one of the men tries to pour a glass of beer he seems unable to get the liquid into the glass, spilling more on the table than in the glass. ...read more.

His does not get to the red room by travelling along a warm bright corridor, it is chilly and dusty. Full of echoes and personified shadows that sweep and flee about him. An unsettling walk. The red room it self is an unsettling place. It is large, cold and shadowy. Unwellcoming. Filled with "black corners" and "germinating darkness." Wells describes "an ocean of mystery" in the room. The darkness and enigma of the room leaves readers think what could be in the room. At the beginning of the story, the main character is considerably confident, and arrogant in his approach towards the red room and his company. He does not seem to belief in his elder's stories of ghosts and the supernatural. "Show me to this haunted room of yours," he greets the prospect of a haunted room with disbelief and sarcasm. When he leaves the sitting room at the beginning of the story he admits that in spite of his efforts to keep himself in a "matter of fact phase" the old people affect him. He is becoming less confident. This story is in first person so you travel this journey into the red room with the character, creating a high tension. ...read more.

Next another candle goes out, as the Wells writes "something seemed to blink on the wall before me." The personification of the candle's disappearance adds tension. It gives the impression that it was not an accident, it make the reader wonder if the candle was put out. Someone is in the room. Then another candle goes out as if it had been, "nipped between finger and thumb." Another indication that he is not alone in the red room. The man's composure now disappears, he is consumed by terror. In a "half-hysterical facetiousness" he struggles to relight the candles as the are extinguished. He has become "frantic with the horror of the coming darkness." The actions of desperate fear take the tension to its highest. An atmosphere is set of terror of an unknown assailant. The man makes a blind attempt to find the door when he is struck or strikes himself unconscious. When the man regains his conscience and talks to the old people ounce more he admits, "Yes," "the room is haunted." Wells describes the fear of fear itself. "A power of darkness." Throughout the story Wells builds tension using many things. The old people, their ancient unfriendly ways, the man's surroundings, the castle, dark cold eerie, and the demise of the young man's confidence into blind terror. Wells builds an atmosphere of pitch black, impenetrable mystery. ...read more.