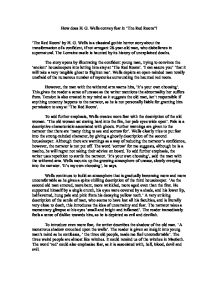 How does H. G. Wells convey fear in 'The Red Room'?

How does H. G. Wells convey fear in 'The Red Room'? 'The Red Room' by H. G. Wells is a classical gothic horror story about the transformation of a confident, if not arrogant 28-year-old man, who disbelieves in supernatural. The Lorraine castle is haunted by its history of unexplained deaths. The story opens by illustrating the confident young man, trying to convince the 'ancient' housekeepers into letting him stay at 'The Red Room'. 'I can assure you' 'that it will take a very tangible ghost to frighten me'. Wells depicts an open-minded man totally unafraid of the numerous number of mysteries surrounding the haunted red room. However, the man with the withered arm warns him, 'it's your own choosing'. This gives the reader a sense of unease as the writer mentions the abnormality her suffers from. Tension is also created in my mind as it suggests the old man, isn't responsible if anything uncanny happens to the narrator, as he is not personally liable for granting him permission to stay at 'The Red Room'. To add further emphasis, Wells creates more fear with the description of the old woman. 'The old woman sat staring hard into the fire, her pale eyes wide open'. Pale is a descriptive characteristic associated with ghosts. Further warnings are given to the narrator that there are 'many thing to see and sorrow for'. ...read more.

After repeating his request the old man with the withered arm replies, 'there's a candle on the slab outside the door'. 'This night of all nights' repeated the old woman twice, as the old man spoke. This starts to create suspense for the reader. H.G. Wells further mounts up the growing uneasy atmosphere, as the old man looked at the young man's 'feet' while addressing him. This suggests he is suffering from the manifestation of his guilt, as he is sending him to his death. While on his quest to the red room, early clues illustrate he is not the fearless man he thinks he is. This is proved evident as he clutches onto his candle, which symbolizes a child fearful of the dark. 'I left the door open until the candle was well alight'. Wells writes this story in the first person, which enables him to share with the reader the man's thought and feelings. It's very evident that the unease begins to unnerve him, as he talks about the oddness of the three old pensioners. The writer uses phrases stereotypical of gothic horror stories. 'The sound of the chilly, dusty echoing passage' rang up and down the spiral staircase'. The young man is illustrated slowly walking down the dark passage rather like a ghost buster, observing every corner. ...read more.

With a cry of terror, I dashed at the alcove'. The man became almost frantic with his terror of the darkness as the candles continued to go out. Finally they were all out, but the fire was still on. He rushed over to relight his candle, but the flames vanished. Wells steps up the tempo of the story and with imagery he creates a real life sinario in the readers mind. 'The candle fell from my hand. I flung out my arms and.... screamed with all my might once, twice, thrice'. The man is now griped with uncontrollable terror. He staggers around the room in a desperate attempt to escape and crashes into a corner of the bed and knocks himself out. When he gains consciousness. The three pensioners are leaning over him, questioning him about the ghost. He no longer disbelieves, and is a changed man. His reply is 'the worst of all things that haunts poor mortal man is.... fear'! He has been transformed by his experience. The old man with the shade agrees 'that it is ....a power of darkness.... there is fear in that room.... black fear'! H. G. Wells is suggesting in this gothic tale that there is always fear in people's minds. We are open to the power of suggestion, no matter how confident we might make ourselves out to be. Supernatural things do exist, no matter how we try to disbelieve in them. Was 'The Red Room' haunted by ghost? ...read more.