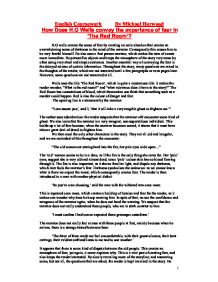 English Coursework By Michael Horwood How Does H.G Wells convey the experience of fear in 'The Red Room'? H.G wells creates the sense of fear by creating an eerie situation that creates an overwhelming sense of darkness in the mind of the narrator. Consequently this causes him to be very fearful himself. He also uses a first person narrator, which makes the turn of events more immediate. He personifies objects and keeps the atmosphere of the story very tense by often using very short and simple sentences. Another essential way of conveying the fear is the delayed release of certain information. Throughout the story, many questions are raised in the thoughts of the reader, which are not answered until a few paragraphs or even pages later. However, some questions are not answered at all. Wells uses the title 'The Red Room', which is quite a mysterious title: it makes the reader wonder, "What is the red room?" and "what relevance does it have to the story?" The Red Room has connotations of blood, which then makes one think that something such as a murder could happen. Red is also the colour of danger and fear. The opening line is a statement by the narrator: "I can assure you', said I, 'that it will take a very tangible ghost to frighten me.'" The author uses adumbration: the reader suspects that the narrator will encounter some kind of ghost. We also learn that the narrator is a very arrogant, non-superstitious individual. This builds up a lot of fear because, when the narrator becomes scared, it shows that it must have taken a great deal of dread to frighten him. ...read more.

Then he quickly closes the door and locks it. These are all actions that show panic and fear. The words 'hastily' and 'at once' move the pace of the sentence very quickly, like a fast beating heart after someone has been suddenly shocked. It is here that we are given a little bit more information: '...the great red room of Lorraine Castle, in which the young duke had died. Or, rather, in which he had begun his dying' The 'great' red room suggests that the room has a notorious reputation, yet we do not know what for. A castle is an unoriginal location for ghost stories. Its relevance is the fact that many castles are large, and also haunted. One may begin to guess that the ghost, as suggested at various points throughout the story is this duke. It is a common belief, even today that innocent, young people who die or murdered may come back to where they were killed. This certainly builds tension and creates a fear of things to come. He explains that there are even more stories: 'And there were other and older stories that clung to the room' The word 'clung' is a very strong verb to use. It is as if the stories will never be banished from the room, or perhaps will never be dispelled from the narrator's mind because he is so frightened. The narrator here becomes more superstitious, by letting his imagination dwell on irrational thoughts. The red room itself is described to be very big: 'My candle was a little tongue of light in its vastness, that failed to pierce the opposite end of the room, and left an ocean of mystery and suggestion beyond its island of light' The narrator uses figurative speech here by making a metaphor out of the candle. ...read more.

This could just be because he was panicking and hit himself. Finally, the overwhelming fear causes him to dash for the door, however he trips and falls down the stairs. This situation is an example of parallelism, as according to the story explained earlier by the narrator, the young duke had experienced the same events. This still gives a mystical atmosphere, as it appears that history is repeating itself, and makes the reader wonder what actually happened in the red room- was there a ghost or not? In conclusion, I think the main cause of fear during the play is the unknown. This, for the narrator is reflected in the darkness around him. However, for the reader, it is the delayed coming of the information that causes the fear throughout the story. However, some questions are never answered. For example, the narrator gives an explanation that it was fear responsible for scaring him. This may be true, but it does not explain what put out the candles. A small draft could have put the first few candles out, however when they go out in different areas of the room at the same time, there must be something supernatural happening. Even the fire goes out, which could not be extinguished by a simple draft. This certainly raises points and morals that Wells has suggested in the story. Firstly, he shows that even in the most scientific and rational society there are questions that cannot be answered. Secondly, fear will never be controlled, and in some situations inevitable, as reflected in the continuous swapping from rational (attempting to control fear) to irrational (succumbing to it). Lastly it shows that for all ghost stories, to be denied of information as a reader if far more powerful than to discover the truth. ?? ?? ?? ?? 1 ...read more.