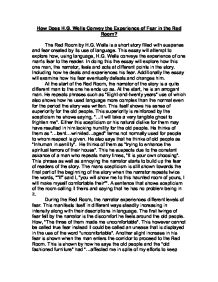 How Does H.G. Wells Convey the Experience of Fear in the Red Room?

How Does H.G. Wells Convey the Experience of Fear in the Red Room? The Red Room by H.G. Wells is a short story filled with suspense and fear created by its use of language. This essay will attempt to explore how, using language, H.G. Wells conveys the experience of one man's fear to the reader. In doing this the essay will explore how this one man, the narrator, feels and acts at different points in the story. Including how he deals and experiences his fear. Additionally the essay will examine how his fear eventually defeats and changes him. At the start of the Red Room, the narrator of the story is a quite different man to the one he ends up as. At the start, he is an arrogant man. He repeats phrases such as "Eight-and-twenty years" use of which also shows how he used language more complex than the normal even for the period the story was written. This itself shows his sense of superiority for the old people. This superiority is reinforced by the scepticism he shows saying, "...it will take a very tangible ghost to frighten me". Either this scepticism or his natural dislike for them may have resulted in him lacking humility for the old people. ...read more.

These things include the personification of a "bronze group" of statues whose shadows "fell with marvellous distinction" and the imagines hearing "a rustling". His imagination also results in him interpreting his environment differently with things becoming "shadowy". An interpretation that could also display a more basic fear of the dark. This more primal fear is shown to exist in him when shadows "chased after" the man as he walked to the room. In the Red Room, the narrator experiences fear and deals with it in several ways. The most obvious of these is his attempts to rationalize things using scientific language. He makes a "systematic examination" of the Red Room and even expresses his fear in scientific language, "a state of considerable nervous tension". In the use of scientific language, the man is shown by the author to be steadily losing control and being overwhelmed as his use of it decreases. The narrator is then shown to deal with his fear of the silence in another way. He talks to himself having conversations about the "impossibility of ghosts and haunting" he also "Strings together rhymes" in an attempt to stop his mind from imagining in the silence. These attempts are also shown by the author to be futile making "Unpleasant echoes" yet another sign of him being overwhelmed. ...read more.

He becomes less assertive asking "Where am I", and more sympathetic to the old people who in turn become more sympathetic to him "speaking as to one who grieves a broken friend". The young narrator has also changed his views finally believing in ghosts and that the Red Room is indeed inhabited by something that he thinks is "pure fear". A description that an arrogant man would not use lightly which as such has been used by H.G. Wells to be showing how the man has changed his use of words that earlier he would of thought of as ridiculous. However, now he thinks such views wiser and has ceased to be as arrogant. The Red Room by H.G. Wells is I believe a story of much brilliant use of language to show the fear building up inside a man. A fear that however I think H.G. Wells wanted to show as one of the man's own making. As such, H.G. Wells uses various techniques of language to increase the perception of fear in the man conveyed to the reader. These techniques include the use of increasing speeds in adjectives and verbs as well as the use of dramatic sentence structure such as shortened sentences. All these things combined make the Red Room in my opinion one of the best stories for expressing fear and its most basic forms to be found in literature. Thomas Roberts 10D ...read more.