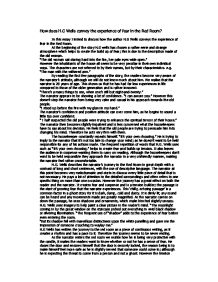 How does H.G Wells convey the experience of fear in the Red Room?

How does H.G Wells convey the experience of fear in the Red Room? In this essay I intend to discuss how the author H.G Wells conveys the experience of fear in the Red Room. At the beginning of the story H.G wells has chosen a rather eerie and strange atmosphere which helps to create the build up of fear; this is due to the description made of the old woman. "The old woman sat staring hard into the fire, her pale eyes wide open." However the inhabitants of the house all seem to be very peculiar in their own individual ways. The characters are not referred to by their names, but by their characteristics. e.g. "The man with the withered arm." By reading the first few paragraphs of the story, the readers become very aware of the narrator's attitude, although we still do not know much about him. We realise that the narrator is 28 years of age. This shows us that he has had far less experiences in life compared to those of the older generation and is rather innocent. "There's a many things to see, when one's still but eight-and-twenty." The narrator appears to be showing a lot of confidence. "I can assure you." However this doesn't stop the narrator from being very calm and casual in his approach towards the old people. "I stood up before the fire with my glass in my hand." ...read more.

However the tension begins to rise as he carries on examining the room. He begins to pick out lots of small detail, again this shows the readers he is being very melodramatic. "I pulled up the blinds and examined the fastenings of the several windows before closing the shutters." The dark detail of the room creates the atmosphere as it makes the narrator feel he has been stranded in a room full of blackness. H.G Wells uses lots of verbs to describe every action made by the narrator. The use of verbs helps explain the narrator but also makes him sound rather superstitious, cautious and curious, it gives him a childish like appearance. He tucks "up the valances of the bed" and begins to look for "secret openings." This makes the readers want to know does he really believe in monsters or ghosts? The narrator then begins to light as many candles as he possibly can. Not only does it give the room a brighter feeling it also makes the narrator feel secure. H.G Wells has structured the story so that there is alternating tension and cheeriness of the narrator in the Red Room. The narrator tries to ignore his anxiety by speaking out aloud, giving rational explanations and reciting rhymes. "I began to string some rhymes together." This puts the reader's mind at ease, yet at the same time the reader knows that tension is being created. ...read more.

The mysterious behaviour can seem curious. H.G Wells has written the story so that it can still escape a 'modern reader'. Although a modern reader is familiar with horror stories and horror films, H.G Wells still keeps the reader engaged with the story. He has created a tense atmosphere throughout the story, and left many cliffhangers, where the readers are left in suspense, making them want to carry on. The imagery that H.G Wells uses in this story is descriptive and traditional of a Victorian horror story with its castle, the characters and of what is in the castle. H.G Wells uses the imagery as part of what the narrator is scared of. He uses vivid black shadows, furniture and the candlelight all as part of the narrators imagined fear of the Red Room. "The shadows seemed to take another step towards me" This again helps a modern reader imagine the fear the narrator is experiencing and since H.G Wells has written the story in first person, the story sounds more emotional, thus the reader is able to understand how narrator is feeling. I have shown how H.G Wells has successfully conveyed fear in the Red Room by discussing how the narrator's attitude is at the beginning of the story, the way in which the narrator handles fear, and how fear defeats the narrator; with the use of descriptive, detailed language, use of verbs and metaphorical language. ...read more.