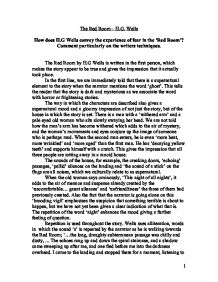 How does H.G Wells convey the experience of fear in the 'Red Room'? Comment particularly on the writers techniques.

The Red Room - H.G. Wells How does H.G Wells convey the experience of fear in the 'Red Room'? Comment particularly on the writers techniques. The Red Room by H.G Wells is written in the first person, which makes the story appear to be true and gives the impression that it actually took place. In the first line, we are immediately told that there is a supernatural element to the story when the narrator mentions the word 'ghost'. This tells the reader that the story is dark and mysterious as we associate the word with horror or frightening stories. The way in which the characters are described also gives a supernatural mood and a gloomy impression of not just the story, but of the house in which the story is set. There is a man with a 'withered arm' and a pale eyed old woman who sits slowly swaying her head. We are not told how the man's arm has become withered which adds to the air of mystery, and the woman's movements and eyes conjure up the image of someone who is perhaps mad. When the second man enters, he is even 'more bent, more wrinkled' and 'more aged' than the first man. ...read more.

Long corridors, passages, old mirrors, spiral staircases, 'ornaments', shadowy corners, germinating darkness's, 'blackness', 'dark oak panelling' and wide chimney's, we also culturally connect with the supernatural and Gothic elements. Tension is built up by H.G. Wells using various clever writing techniques. The use of commas and careful punctuation speeds up the pace of the writing. 'I walked back, relit one, and as I did so, I saw the candle in the right sconce of one of the mirrors wink and go right out, and almost immediately its companion followed it.' The many commas here have effectively sped up the pace, adding a powerful tension and energy to the piece of writing. Wells also uses punctuation to enhance the narrator's feeling of confusion. He uses commas to break the action into segments, 'I bruised myself on the thigh against a table, I sent a chair headlong, I stumbled and fell ...'. Personification is used in this story to give the reader the impression that the narrator is not alone in the Red Room although he thinks he is. He does not notice that the candles had gone out he 'simply turned and saw that darkness was there', almost as if darkness was someone who had come silently into the room. ...read more.

Talk of the 'power of darkness', 'curses', 'black fear', 'sin' and 'spiritual terrors in their house' create a sense of terror in the reader, which makes them feel apprehensive when the narrator enters the 'Red Room'. The 'ghostly' element is highlighted throughout the story as many ghostlike and abnormal happenings culturally and historically take place 'after midnight'. The Red Room was the place 'in which the young duke had died'. This again makes the reader question the situation and contributes to the overall feeling of dread and horror as he had in fact died during a similar vigil. Another tale is briefly mentioned and as with all fear it is what we do not know that frightens us. H.G. Wells uses many tried and tested writing techniques to convey a sensation of fear and horror to the reader. The purpose of the story is to illustrate that fear itself is the enemy as it will terrify a person more than a ghost, spirit or the supernatural. Fear has a presence that is powerful and 'creeps along the corridor and follows you'. The story is very effective as it pulls the reader in and convinces us that we are reading a genuine ghost story only to realise that the narrator wasn't being haunted by any of these, but by his own fear of the unknown. 1 ...read more.