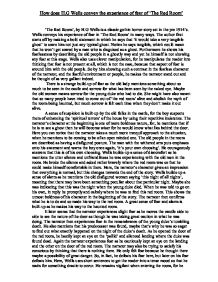 How does H.G Wells convey the experience of fear of The Red Room

How does H.G Wells convey the experience of fear of 'The Red Room' 'The Red Room', by H.G Wells is a classic gothic horror story set in the pre 1914's. Wells conveys his experience of fear in 'The Red Room' in many ways. The author first starts off by making a bold statement in which he says that 'it would take a very tangible ghost' to scare him not just any typical ghost. Notice he says tangible, which could mean that he won't get scared by a man who is disguised as a ghost. Furthermore he shows his fearlessness by describing the old people in a ghostly way and yet he himself is not showing any fear at this stage. Wells also uses clever manipulation, for he manipulates the reader into thinking that fear is not present at all, which is not the case, because that aspect of fear is around him with the old people. So by him showing such a contrast in the fearless character of the narrator, and the fearful environment or people, he makes the narrator stand out and be thought of as very gallant indeed. There is a strange build-up of fear as the old lady mentions something about so much to be seen in the castle and sorrow for what has been seen by the naked eye. ...read more.

He also dealt with the fear by lighting candles, so much so that the entire room was filled with light. He also took the precaution of barricading the door to stop any intruders from entering. Again, he shows the total opposite of his brash character at the beginning of the story and places a revolver out 'ready to hand'. The narrator now experiences fear by his echoing sound and the crackling of the fire. At first the narrator was fearful of the noises he heard but later describes how he was feeling fear from the silence and solitude overcome by the room. It seems that the narrator deals with fear by satisfying himself - for again he walks with a candle into one corner of the room because he feared something tangible lurking in the darkness. The narrator seems to start feeling tense for a reason described as being non-apparent. He assumes that nothing super natural was going to happen, but later was wronged by those very words. Although he knows that he experiences fear he tries to defeat or deal with it by beginning to "string some together" and talking loudly to himself trying to convince himself that ghosts don't exist. He then tries to think about the old "distorted" people downstairs to try and overcome fear. ...read more.

Everything changes, his attitude toward the whole matter is now of a positive one. He replies, 'Yes, the room is haunted'. So at first his conscious at the beginning of the story told him that none of this rubbish ever existed, and he comes out of the Red Room finally admitting to what he had witnessed. It was thought that the ghosts of the earl and countess were haunting the room, but they were mistaken, for he described that it was the shear nakedness of fear in its darkest form with brought about this myth. Wells says that it followed him through the corridor and fought against it in the room. He describes this fear as not having light nor sound, fear that is beyond reasoning. He then abruptly stopped speaking as he lifts his hands up to his head in pain. Then, finally, the old man speaks out with fear and describes how the darkness lurks behind the curtains, creeps along the corridor at dusk right behind you, 'so that you dare not turn'. Wells uses a mixture of short and abrupt sentences and the personification of the shadows, which plays a big role, all in an exciting attempt to convey the experience of fear in the Red Room. Wells leaves a nail-biting ending as the old man states that it is, fear, 'black fear' which haunts that room and will remain 'so long as the house of sin endures'. By Abbas Dhami ...read more.