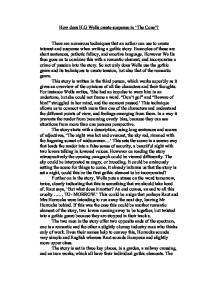 How does H.G Wells create suspense in 'The Cone'?

How does H.G Wells create suspense in 'The Cone'? There are numerous techniques that an author can use to create interest and suspense when writing a gothic story. Examples of these are short sentences, pathetic fallacy, and emotive language. However Wells then goes on to combine this with a romantic element, and incorporates a crime of passion into the story. So not only does Wells use the gothic genre and its techniques to create tension, but also that of the romantic genre. This story is written in the third person, which works superbly as it gives an overview of the opinions of all the characters and their thoughts. For instance Wells writes, 'She had an impulse to warn him in an undertone, but she could not frame a word. "Don't go!" and "Beware of him!" struggled in her mind, and the moment passed.' This technique allows us to connect with more than one of the characters and understand the different points of view, and feelings emerging from them. ...read more.

The story is set in three key places, in a garden, a railway crossing, and an iron works, which all have their individual gothic elements. The garden is portrayed as a dark, still place, with an atmospheric sky looming overhead, the railway crossing is where Raut experiences a near death incident, but oddly enough Horrocks saves him, then the final setting, the iron works, perhaps the most gothic of all. 'As they came out of the labyrinth of clinker heaps and mounds of coal and ore, the noises of the rolling mill sprang upon them suddenly, loud, near and distinct.' The iron works was loud, noisy, mechanical and hot, fire was poignant in every description of the building and indications of the plot still to come were being given all the time, 'temperature near a thousand degrees. If YOU were dropped into it ..... flash into flame like a pinch of gunpowder in a candle.' At this point I believe that Wells wanted to reveal to the reader what Horrocks' intentions were, but earlier on little indications were appearing to direct the reader. ...read more.

He obviously has a guilty conscience and is afraid of Horrocks, this great bulldog of an Englishman, with every right too. Horrocks was a dark shadowy character with patches under his penthouse brows and a very menacing side. In this story the word cone is mentioned over twenty times and is featured in the title. Therefore I think that Wells really wants us to take notice of this and start speculating on how this affects the end of the story, of course, once read we discover that the cone is actually the piece of machinery that kills Raut, and finishes the story. At the very end of the story Horrocks' conscience comes back to him and he says, 'Oh god! What have I done?' This shows that he is not a cold-hearted murderer and it shows the reader that perhaps normally he would have been a nice man, but under the circumstances was pushed to do something he wouldn't have normally done. In conclusion it appears that Wells uses many gothic styles throughout the story to increase tension. He uses description, long sentences, passion, and betrayal. This creates a very gothic and interesting story. ...read more.