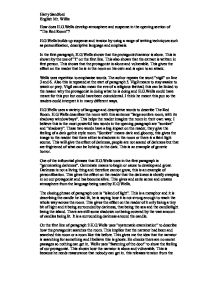 How does H.G.Wells develop atmosphere and suspense in the opening section of The Red Room?

How does H.G.Wells develop atmosphere and suspense in the opening section of "The Red Room"? H.G.Wells builds up suspense and tension by using a range of writing techniques such as personification, descriptive language and emphasis. In the first paragraph, H.G.Wells shows that the protagonist/narrator is alone. This is shown by the use of "I" on the first line. This also shows that the extract is written in first person. This shows that the protagonist is alone and vulnerable. This gives the effect on the reader that he is in the room on his own and is open to an attack. Wells uses repetition to emphasise words. The author repeats the word "vigil" on line 3 and 6. Also this is repeated at the start of paragraph 5. Vigil means to stay awake to watch or prey. Vigil can also mean the eve of a religious festival, this can be linked to the reason why the protagonist is doing what he is doing and H.G.Wells could have meant for this pun but could have been coincidental. I think he meant this pun so the readers could interpret it in many different ways. H.G.Wells uses a variety of language and descriptive words to describe The Red Room. H.G.Wells describes the room with this sentence "large sombre room, with its shadowy window bays". ...read more.

This is a good use of imagery as it pus a picture the readers mind and this is a good choice of language to get this image across. The room is portrayed as being quite large with a lot of dark furniture and shadowy places. This is because in paragraph 3 H.G.Wells uses the phrase "even with seven candles the place was merely dim". Seven candles would give off a lot of light if evenly spread out but if the room was bigger this would create even more shadows. This would then affect the protagonist therefore affecting the reader, this gives the effect of there being a lot of shadows and the room being eerie, this then creates a daunting atmosphere and creates suspense. The last two lines of paragraph 3 the author creates an eerie and frightening atmosphere. The author writes "fire-flickering kept the shadows and penumbra perpetually shifting and stirring". This is a good use of alliteration and this is used to emphasise penumbra. Penumbra comes from Latin, peanes meaning almost, nearly and umbra meaning shadow. Penumbra gives the effect of a partial eclipse it is almost a complete shadow but it had a faint ray of light through it. This gives the room this half shadow half light eerie feel therefore making the audience think and creating and atmosphere and tension. ...read more.

This therefore creates an atmosphere as the reader wants to know what is happening and does not get to find out as the narrator does not know what is happening also. The author puts a picture into the mind of the reader that the narrator is dead. This is because H.G.Wells says "a horrible sensation of falling that lasted an age," this can be interpreted in many different ways. One of these ways is that the protagonist had fallen down the stairs and has been knocked out or had fallen to his death. This can be related back to old myth of the Duke dying to his death falling down the stairs. Also another point to back this up is that the narrator does not know whether it was him striking himself on the forehead or if it was somebody else. This then creates an atmosphere as there could be a person in the room or it could have been himself. This then makes the reader read on as H.G.Wells has built up tension and has created an atmosphere and the reader is eager to read on. I believe that I have described and given enough evidence of H.G.Wells developing tension and building up and atmosphere in "The Red Room". ?? ?? ?? ?? Harry Sandford English Mr. Willis ...read more.