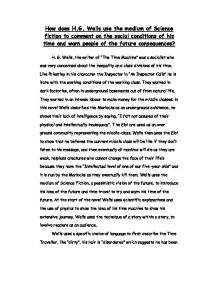 How does H.G. Wells use the medium of Science fiction to comment on the social conditions of his time and warn people of the future consequences? H. G. Wells, the writer of &quot;The Time Machine&quot; was

How does H.G. Wells use the medium of Science fiction to comment on the social conditions of his time and warn people of the future consequences? H. G. Wells, the writer of "The Time Machine" was a socialist who was very concerned about the inequality and class divisions of his time. Like Priestley in his character the Inspector in "An Inspector Calls" he is irate with the working conditions of the working class. They worked in dark factories, often in underground basements cut of from natural life. They worked in an intense labour to make money for the middle classes; in this novel Wells describes the Morlocks as an underground existence, he shows their lack of intelligence by saying, "I felt not assured of their physical and intellectually inadequacy". The Eloi are used as an over ground community representing the middle-class. Wells then uses the Eloi to show that he believes the current middle class will be like if they don't listen to his message, and then eventually all mankind will die as they are weak, helpless creatures who cannot change the face of their life's because they have the "Intellectual level of one of our five-year olds" and it is run by the Morlocks as they eventually kill them. ...read more.

The Traveller is disheartened by the Eloi's lack of intelligence and sophistication as, "I had always anticipated that the people of the year Eight Hundred and Two Thousand odd would be incredibly in front of us in... everything". Wells is using this vision of the Eloi being unintelligent to show us what the thinks the world will be like for the middle-class, which is a life in which they are weak and have a lack of knowledge because everything is provided for them by the Morlocks. Wells shows us examples of what the world will be like by using recognisable locations like "masses of aluminium" and "nettles". However he is in a very different world "no small houses to be seen". Wells uses this vision to show he is not a believer of his current class system because of the hardships the working class face. This is proved as the palace like buildings suggest "communism", which would suggest the current class system has been destroyed. Wells then makes clear that the world have evolved into a perfect existence, "no hedges, no signs of property rights... the whole earth had become a garden". ...read more.

Wells warns that the pursuit of a life of comfort and ease will eventually result in the loss of all "intellectually versatility". The Eloi became a vulnerable and powerless race that will ultimately become extinct. Whereas the Morlocks in their struggle to stay alive increase their strength and resourcefulness, but like the Eloi will eventually die out. Wells concludes the novel by having his Time Traveller travel several million years into the future, in which no recognisable human life exists, only a "monstrous crab-like creature", only an image of the first forms of life on the planet. As the Traveller keeps travelling in this vision he eventually finds "green slime on rocks". Eventually he sees the dying out of the sun, leaving him in "great darkness" in a cold that "smote" him to the "marrow". Wells uses this pessimistic view of the future to make a more powerful point in the novel. For conclusion, I believe H.G Wells uses the medium of Science Fiction to comment upon the social conditions of his time using the Eloi, the underground middle-class community, and the Morlocks, the over ground working-class community well. As he does have strong point of view but they do come across and would warn people of his time of the consequences they are having now and in the future in millions of years. ...read more.