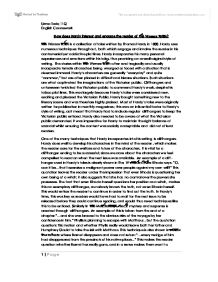 How does Hardy interest and engage the reader of The Wessex Tales?

How does Hardy interest and engage the reader of The Wessex Tales? The Wessex Tales is a collection of tales written by Thomas Hardy in 1888. Hardy uses numerous techniques throughout, both which engage and involve the reader in his controversial yet addictive plot lines. Hardy incorporates his many personal experiences and emotions within his tales, thus providing an overall original style of writing. The stories within The Wessex Tales often end tragically and usually incorporate female characters being wronged or faced with a situation that is deemed immoral. Hardy's characters are generally "everyday" and quite "common," but are often placed in difficult and bizarre situations. Such situations are what captivated the imaginations of the Victorian public. Cliffhangers and unforeseen twists led the Victorian public to commend Hardy's work, despite his taboo plot lines. This was largely because Hardy's tales were considered new, exciting and pleased the Victorian Public. Hardy bought something new to the literary scene and was therefore highly praised. Most of Hardy's tales were originally written for publication in monthly magazines; this was an influential factor to Hardy's style of writing, as it meant that Hardy had to include regular cliffhangers to keep the Victorian public enticed. Hardy also needed to be aware of what the Victorian public demanded. It was imperative for Hardy to maintain the right balance of scandal whilst ensuring the content was socially acceptable and did not offend readers. One of the many techniques that Hardy incorporates into his writing is cliffhangers. Hardy does well to develop his characters in the mind of the reader, which makes the reader care for the welfare and future of the characters. ...read more.

Lizzy is part of a smuggling situation, which then leads to many questions on whether or not Stockdale will still marry her. Thomas Hardy had a keen interest in the idea of chance and fate; he believed that a single small motion could have a catastrophic effect. In The Wessex Tales, Hardy creates many taboo plot lines. These include people suffering from a great line of misfortune. Hardy maintains the interest of the reader by emphasising the role of chance and fate in people's lives. He suggests that no matter what path/route people undergo, they will end up at the place they are intended. This is the reason as to why Hardy's stories are so engaging; he creates numerous plot twists so the audience cannot predict what will happen. This all links in with Hardy's personal experiences, when he was born doctors assumed he was dead, as Hardy was not breathing. The doctor then left Hardy to the side and attended to Hardy's mother. However, minutes later a nurse noticed that Hardy was in fact breathing and alive. This moment sparked the imagination of Hardy; he found that the chance of the nurse noticing him was extremely rare yet very interesting. In the Withered Arm, Gertrude's marriage appears to be failing. Farmer Lodge loses interest in Gertrude because she had changed. She had a withered arm, which made her unappealing. She also became obsessed with finding a cure for her arm and as a result became very bitter and fanatical. Her character had immensely changed: "The once blithe-hearted and enlightened Gertrude was turning into an irritable, superstitious woman..." ...read more.

Hardy mocks and degrades the social hierarchy and suggests that it causes a lot of unnecessary grief. An example of this is from Fellow Townsmen, where the character Barnet marries for class and status rather than love. This is opposite to what Humphrey Gould does. The reader would thus feel compelled to read on as Gould does something taboo for Victorian times so people would want to see what the outcome was. Hardy challenges the views of the time and provides something new and original for the reader. The relationships that are portrayed to be based on status or looks in these tales are very shallow, false and contain no real substance. The relationship between Gertrude and Lodge and the Barnets are prime examples of this. These relationships are not perceived well in Hardy's stories. This can be compared with the relationship of Matthaus and Phyllis, even though the relationship did not work, we feel sympathy for the characters because we know their love was genuine. This factor of marriage for status and not love interests readers as it was common practice in the Victorian times, and although it was rarely admitted it was a factor which may have been involved in many readers lives. In conclusion, Thomas Hardy successfully uses a number of techniques to interest and engage the reader. Such techniques as: Cliffhangers, taboo plot lines and unexpected plot twists. All these techniques engage and interest the reader and thus encourage them to continue reading for answers to the many questions the tales bring up. Overall, Hardy gave the Victorian public what they wanted, he made sure that his tales were not predictable and classic, but instead bought something new to the literary scene. ?? ?? ?? ?? Uzma Tariq 11Q English Coursework 1 | Page ...read more.