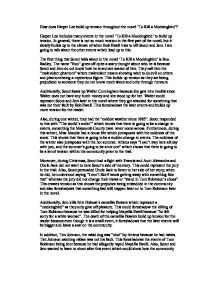 How does Harper Lee build up tension throughout the novel 'To Kill a Mockingbird'?

How does Harper Lee build up tension throughout the novel 'To Kill a Mockingbird'? Harper Lee includes many events in the novel 'To Kill a Mockingbird' to build up tension. In general, there is not so much tension in the first part of the novel, but it slowly builds up to the climax of when Bob Ewell tries to kill Scout and Jem. I am going to talk about the other events which lead up to this. The first thing that Scout talks about in the novel 'To Kill a Mockingbird' is Boo Radley. The name "Boo" gives off quite a scary thought about who he is because Scout and Jem do not know how he is and are scared of him. They call him the "malevolent phantom" where malevolent means showing wish to do evil on others and phantom being a mysterious figure. This builds up tension as they are being prejudiced to someone they do not know much about and only through rumours. Additionally, Scout beats up Walter Cunningham because she gets into trouble since Walter does not have any lunch money and she stood up for her. ...read more.

This could represent the jury in the trial. Also, Scout persuaded Uncle Jack to listen to her side of her story; when he did, he understood saying "I don't like Francis getting away with something like that" whereas the jury did not change their views or "stand in Tom Robinson's shoes" This creates tension as this shows the prejudice being embedded in the community and also foreshadows that something bad will happen later on to Tom Robinson later in the novel. Additionally, Jem kills Mrs Dubose's camellia flowers which represent a "mockingbird" as they only give off pleasure. This could foreshadow the killing of Tom Robinson because he was killed for helping Mayella Ewell because "he felt sorry for a white woman". The death of the camellia flowers build up tension for the reader because even though it is a small event, it foreshadows that the later events will be bigger and leave a scar on the community. In addition, Tim Johnson, the rabid dog was "shot" by Atticus because he had rabies. ...read more.

This represents the white community knowing that Tom Robinson is innocent, but because he is black, they still have to persecute him. This builds up tension within the novel because the event gives off a negative view of the white community and this prejudice is going to continually escalate. Finally, near the end of the novel; Cecil Jacobs jumped out at Scout and Jem whilst walking through the dark woods on Halloween. Halloween is seen as a scary time where people dress up as werewolves and other scary creatures. Also, the event took place when it was dark and quiet; people usually associate this time as unpredictable and thought of as scary. Cecil Jacobs jumping out at Scout and Jem foreshadows Bob Ewell hiding away from them but jumping out and attacking them. This again builds up tension to the climax where Bob Ewell attacks them children. All these events build up tension throughout the novel, leading up to the climax of where Bob Ewell attacks Scout and Jem. Even thought some of the events are small, they help to build up the tension and foreshadows the later events of the novel. ...read more.

Overall this is a good essay which details the events leading up to Bob Ewell’s attack on Jem and Scout and how these create a rising sense of tension throughout the essay. There is a clear structure to the essay ...

Overall this is a good essay which details the events leading up to Bob Ewell’s attack on Jem and Scout and how these create a rising sense of tension throughout the essay. There is a clear structure to the essay and ample use of direct quotation from the text. The style of the essay is quite repetitive in places, and the essay could benefit from the use of more literary terminology and proofreading, but in general the essay successfully conveys the manner in which Harper Lee builds up tension though the novel.

The level of analysis here is good. The candidate discusses many literary devices put to use in the novel, for example the juxtaposition of hot and cold during the ‘coldest winter since 1885’, and the widespread use of foreshadowing, of both Tom’s trial and the attack on Jem and scout. The ‘Mockingbird’ motif is alluded to, ‘Additionally, Jem kills Mrs Dubose's camellia flowers which represent a "mockingbird" as they only give off pleasure’, however it could benefit from being discussed in more detail. The candidate includes a lot of direct quotation from the text, but there is very little discussion of the trial itself. The candidate seems to take it for granted that the climactic scene of the novel is Bob Ewell’s attack on Jem and Scout; but could it be Tom’s guilty verdict? If not, how does the verdict impact on the level of tension in the novel? Does it increase it, or does it release it, making Ewell’s attack even more shocking?

The quality of writing in this essay is generally good, although there are spelling and punctuation errors here and there, ‘Finally, near the end of the novel; Cecil Jacobs jumped out at Scout and Jem whilst walking through the dark woods on Halloween’; ‘here’ in place of ‘hear’ and so on. These mistakes should be eliminated by proofreading, showing the importance of doing so before submission – SPG marks are easily lost. The structure of the essay is sound, however a stronger conclusion detailing the arguments put forward by the candidate would improve it greatly.